Peter Pan was the first show I saw Alex in.  The months leading up to the show, I’d hear my mother talk about this girl who popped out of nowhere and was amazing at acting.  Then last year Alex joined Stage crew and she was amazing at that.  So when she auditioned of Treasure Island Wayne was not pleased I stole her.  Anyway, as an Actor/Techie in high school, I have a special place for those who try both sides of the darkness, and Alex is talented at both.  She can perform Shakespeare as well as hold a power tool with might.  Please enjoy meeting Sophomore Alex Gieske.

1. What inspired your journey into the Arts?

In sixth grade, a friend of mine forced me to audition for the school play because she did not want to go by herself. I ended up being cast and continued in theatre ever since. Prior to this, I hated public speaking.

2. Who is your Character and how have you created that personality? What has been the biggest challenge you have come across in your character so far?

My character is Helsa Wenzel who is her brother, a female impersonator and also her cousin, the cook from Coblenz. I created her by trying to become a homicidal maniac in real life and figuring out how Dieter would react to Helsa’s life. I have had a hard time portraying the manliness of Dieter, while still trying to remain feminine because of his female impersonator background. 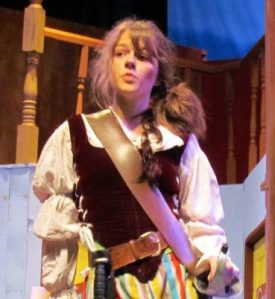 3. What are your funniest and worst experiences performing in front of an audience?

Worst: Having to flop on stage, pretending to be a fish and then hitting my head on the stage.

Funniest: Being run over by the moving house in Brigadoon during one of the scene changes and then running into the green room silently laughing with Sam. (This is technically not performing, but I find it immensely amusing.)

4. If you had a chance to work with anyone of your choosing, who would it be?

I think it would be really interesting to work with Ryan Stiles, just because he seems like a cool guy.

5. What are you most proud of and what dreams or goals would you like to fulfill?

I am most proud of my relationship with my brothers. Being the only girl in the family, most people assume that I don’t particularly care for my brothers, but in reality, they are my best friends and we get along really well. My goal is to travel the world for a while and then settle down with a job and family.

6. What do you want to do After High School? Do you have any dreams or hopes for the Future? Do you know where you are going to school?

After high school, I would like to major in nursing. I have always wanted to go into the medical field and I feel that I would be able to help people in small ways if I became a nurse. I am looking into going to Viterbo because they also have a great acting program, but I will most likely follow in my brother’s footsteps and go to MSOE: School of Nursing. My dream job is to be the founder of an organization that performs professional plays to hospital patients that are not able to go out and have fun. Still working on the logistics of that one.

7. Which three famous people would you invite to dinner and why [dead celebrities included]? And what tasty treat would you prepare?

I would invite Joseph Stalin, Winston Churchill and Harry Truman to dinner because I have a feeling the conversation would be really interesting. I would also serve them brownies, because I love brownies.

8. What is your favorite genre of music? Why?

I love the oldies. I have no idea why. But I am really not that picky in my music. Just not rap. Anything but rap.

9. Have you read any plays lately? What are your favorite?

I do not really read many plays, although I would like to. My favorite play is typically the one that I am in, but A Midsummer Night’s Dream is most definitely pretty high up there.

10. Tell us 5 interesting and unknown facts about yourself!

a) I named my dog after the German chocolate, Duplo.
b) I have a horrible phobia of taxidermy.
c) Of the six plays that I have been in, five of them I played a character that was supposed to be a guy.
d) I can lick my elbow.
e) I am very disorganized and I hate that.

"Lost City of Atlantis" PATs Gala!
We had an amazing PATs Banquet last night! Thanks to everyone who helped plan an amazing night!
Getting ready for the PATs tomorrow!
Theatrical Dance Showcase
The Amazing Race 2022 was an amazing success!!!
Some photos from our last tech of the Seminar Show! Come see it tonight at 7pm in the Black Box!!