I have to admit, the first day of tech theatre didn’t draw my attention and made me rethink my class schedule. However, I failed to remember that there were a plethora of days left for this class to wow me and leave me with no regrets. This is exactly what tech theatre did. Whether it’s cutting wood or building a frame, the class somehow found a way of making the most displeasing tasks a blast. Shall I tell you why you should consider taking tech theatre?

Now, as a girl who makes the men of the house do the laborious tasks such as nailing pictures up and fixing things, I was very surprised to find out that I would be doing these tasks as well. At first, I was a bit dubious, but later on I realized that I will probably need to learn these skills, especially if I turn out to be a lonely sad cat lady. So I suppose this class was for the best. First, we began by learning to hammer nails in and such. Not too bad right? And then it escalated into using an electric saw (yes I was shocked too).  After this, we began making frames, which doesn’t seem too ridiculous. However, it is very ridiculous. My frame ended up being more of a trapezoid than a rectangle. But that’s okay because that’s how I like my frames. It was a fun time, even if I messed up the whole unit, I still ended up learning how to do things I would need to know later in life.

We also went through a costume unit. It was actually pretty fun because it’s interesting to see what people used wear and why they wore it. And its funny seeing how clothing slowly decreases over time. The project took a long time to do, but it was worth it. Now I know more about clothing than I did when I joined the class. And once you do projects with other people, you become friends with the people in your group so the class is always fun to look forward to.

Another really fun thing in the class we did was going up to the catwalk, which is over the audience. It was exciting but it was one of those “I could die any minute what a rush” things (don’t worry, you can’t actually die up there). It was really interesting to be over the audience because nobody really sits down in the audience and thinks “I wonder if someone is above me right now.” Its also fun to think about because someone could drop tomatoes from the catwalk on audience members and it would be pretty amusing (until you get suspended).

Finally, the most important part of tech theatre; makeup. This unit was actually bomb because it was so much fun making yourself look completely different. We got to do such cool things, like making ourselves into animals. I made myself into a tiger because it seemed like an interesting option and I thought I could do a pretty good job with it.

We also experimented with just trying out makeup. This was in order to establish some sort of base that we can go off in our other projects. You have to know how to run before entering a marathon.

We also did some old age makeup. It was interesting to see how I would age. And after that project I hope I never grow old. 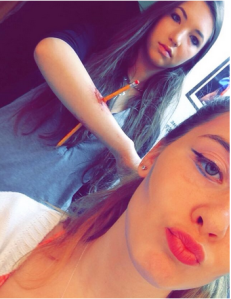 Finally, we did our final projects in makeup! For this, we could choose anything we wanted. I decided to be a fairy because I wanted to see what it would be like and such. A lot of people did pencils and nails in their arms, which was really cool.

In general, this class is a really fun time, as you can see. I think it really helped me grow and make new friends. I have no regrets and I am very glad I took this class and wish I could retake it. TAKE TECH THEATRE!!!

This is Lisa’s 3rd Theatre class at HHS, having already completed Acting 1 and Acting 2.

Spring Play... I couldn't find a reference, so it's just a scene from the play.1
The Fall Play...
It is finally time to announce the Musical...
"Lost City of Atlantis" PATs Gala!
We had an amazing PATs Banquet last night! Thanks to everyone who helped plan an amazing night!
Getting ready for the PATs tomorrow!