What do you play?
Everyone’s personal trainer and team energizer. And Captain Hook on the side.

What do you love about this character?
Hook is kind of a drama queen… It’s fun playing that person that always complains about everything and makes a big deal out of every situation. I’d like to believe I’m not that way in real life, so it’s an amusing change of pace to play the type of person I work towards not being. 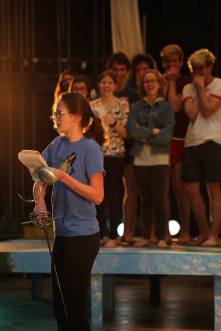 What do you hate about this character?
Hook secludes herself from relationships with others because she believes in “being on her own level” and making sure she is always top dawg. It’s nice having a connection with another character on stage to feed off of their emotions and build interactions with. But when everyone is either afraid of you, trying to kill you, or just taking orders from you… well that’s a conflict of interest.

Besides yourself, which character in this production is going to blow people away?
Sarah Mai has been amazing in any role she’s been in, and once again she owns it playing Tinkerbell. She is already such an established character with wit and sass; not to mention her accent is just flawless. Also, Zachary Ginkel made me cry with one of Peter Pan’s monologues so I guess that’s good acting.

If you could be any other character in the show, who would you be?
Definitely either one of the star warriors or mermaids. They’re so sick (you’ll see why).

Who has the best costume?
Well we’re not really costumed yet but Emily Harley’s outfits are always cute. I think that counts.

What do you want to be when you grow up?
I am looking forward to pursuing a degree in pharmacy and going on to be a clinical pharmacist. A little different than theater, I’d say.

What’s your perfect Sunday afternoon look like?
In pajamas watching the Office and not doing homework– promptly followed by hopping into bed and going to sleep at 9 pm.

When you get a five minute break during rehearsal, what do you spend time doing?
I usually get in a trance from watching everyone else in their scenes. I like to watch other actors and take a mental note of how they work with their character and what they do well/ how they do it so I can take that and try to improve my own character when I am on stage. If I get distracted from that, you can probably find me talking to Nikko Nelson off stage… She’s really funny and it’s hard not to interrupt the scene going on from laughing behind the curtain.

One thought on “Meet the Artist: Lily Higgins”

Spring Play... I couldn't find a reference, so it's just a scene from the play.1
The Fall Play...
It is finally time to announce the Musical...
"Lost City of Atlantis" PATs Gala!
We had an amazing PATs Banquet last night! Thanks to everyone who helped plan an amazing night!
Getting ready for the PATs tomorrow!