I was never one for School Spirit, in High School or College. I mean I wore my school colors for Homecoming and marched in the parade, but it was always put together haphazardly.

When I became a teacher, it also began as a haphazard round up to the parade…but this year was different.  This year we have students with spirit who encouraged others to have that same school spirit.  This year was a whole new ball game.

We entered a car in the car show…and really when I say car, I mean amazing 1950’s red Ford truck.  We decked it out with balloons and signs and the kids really got into the Parade this year.  A large number of Drama Club members came out to march.  It was amazing. 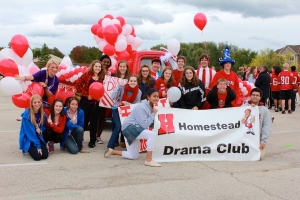 Not only did we take over the parade this year, but two of our Drama Club members, were selected to be the Emcee’s for the Pep Rally, Joe Schwalb and Marty Bergquist a junior and senior respectively.  They raided the dressing rooms during 5th hour and decked themselves out in Red and White.  It was an amazing day.

And that night, we killed the Cedarburg Bulldogs 41-10.  Go Highlanders! 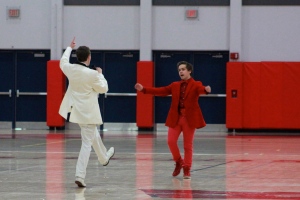