The funny show, “The Musical Comedy Murders of 1940,” is Homestead High School’s latest addition to their repertoire … and a keeper it is. Full of one-liners and zany characters with a lot of who-dun-it added, one is reminded of Agatha Christie’s mysteries, but on steroids.

The real stars of the show, however, are the set and costume design, both of which are the most responsible for transporting the audience to 1940 New York.   Part of the charm of the show is a set that features secret passages, murderous books and a magic closet. This is quite a challenge for any theatre, but Grimes and her technical students bring it off with grand style. While I’m passing out technical kudos, the spooky lighting design is also a winner. 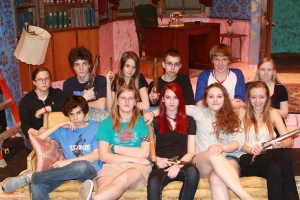 Stage Crew’s expertly assembled set added a great deal to the play’s entertainment value. Characters disappeared and reappeared all night as doors to secret passageways slid open and shut with clockwork precision. In fact, no machinery was involved—techies with a good sense of timing pulled each door every time an actor onstage hit the corresponding switch.

The scenes involving radio music, moving bookcases and lighting are effective and notably on cue. The set successfully supported the action taking place on stage and the assortment of props—from the piano and bench to the pen on the desk—adequately conveyed the library atmosphere. Costumes were also efficiently assembled and suitably reflected the time period.

For a few laughs and a dash of mystery, all while supporting a local theater company, you won’t do any better than The Musical Comedy Murders of 1940.

The Musical Comedy Murders of 1940 plays through May 5 at the James Barr Auditorium in Homestead High School, 5000 W. Mequon Rd. Mequon WI 53092. Tickets are $7-$8. Tickets are sold an hour before each show.  General seating.

Come see "Hello, Dolly!" tonight at 7pm!!!
The various stages of "ready" you see during Mic Check.
The Stage Manager and Production Manager placing the iconic staircase in "Hello, Dolly!" They have to re-position it every night because it moves slightly each time it's rolled on and off.
In honor of "Hello, Dolly!" opening tomorrow and Black History Month starting today I want to talk about Pearl Bailey, an amazing Dolly Levi.
We could watch Mr. O conduct all day. He just dances with the orchestra, it's so wonderful!
We are having fun and raising our heartbeats with @kothidancecompany