It wasn’t until this year that I realized (through my sister, Lillian) that Maddie was that adorable Gretel in Sound of Music.  What happened?  Ok, all joking aside, Maddie has an amazing voice and her acting skills are being used well this trimester.  It was been quite exciting to work with Maddie for two years now.  This girl will do amazing things in the years to come at HHS!

1. How did you get into theatre?
I don’t even remember how I started with the arts… According to my parents I used to perform shows in front of them in our living room when I was really little, and it just took off from there.

2. Are you performing in any current projects? Who is your character and how have you created that personality?
I just finished Seminar’s Ajax in Iraq. I played Gertrude Bell, Debbie, and I was in the chorus as well. One thing I especially did to create the Gertrude personality was do some research on her because she was real and was very influential in the Middle-East and Britain, especially for a woman at her time. 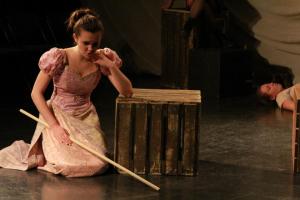 3. What are your funniest and worst experiences performing in front of an audience?
Funniest: In the first play I was in, I had to be a bank robber that had to do Michael Jackson’s Thriller dance….still don’t understand what that had to do with the show at all.
Worst: Having to ballroom dance with Anika Hitt in Fiddler on the Roof was pretty rough.

4. What kind of role do you want to do most?
I guess I like dramatic roles, but comedic character roles are pretty fun too.

5. Who is your role model? Why?
Jennifer Lawrence: she’s been so successful but she still seems down-to-earth and relatable.

6. If you had a chance to work with anyone of your choosing, who would it be?
I’d probably work with Aaron Tveit because I’m obsessed with him. (I met him once and it was probably the best moment of my life.)

7. What is better: to perform in theatre or film?
Theatre. Being able to actually connect with a live audience really adds to every aspect of the production.

5 facts about me…
-All my aunts are named Tracey.
-My favorite movies are probably The Notebook and Titanic.
-I think I’ve memorized all the lines to the movies above…
-I had an imaginary friend named Hobie when I was five. Then one day I decided Hobie died because he was shot in an alley by a policeman.
-I can’t stand peanut butter or mayonnaise.