Last year, I traveled to England as my summer trip (I also did this for spring break, but didn’t go as extensivally).  Most of you know why I went to England twice in one year, and for those of you who don’t, well, my sister and boyfriend decided to run away to the UK for grad-school, so I was visiting them.  On one trip, I paid a visit to Stratford-upon-Avon, birthplace of Shakespeare.  This was right before A Midsummer Night’s Dream, so I was all in the mood for that play and all things Shakespeare (not that I ever not in the mood for Shakespeare). Anyroad, I went to see the house where he was born, his mothers house, his daughters house and the house he died in  and finally to his grave and memorial in the parish church.

I was curious to see whether visiting these places would give me any feeling of connection to the great man or insight into what made him tick.

The first thing it did for me was connect me with the very different times he lived in. “The past is a foreign country: they do things differently there” as LP Hartley wrote in the Go Between. The Shakespeares certainly weren’t working class – his dad was a reasonably wealthy merchant and the town mayor. But in those days of course even the middle-class lived a life which would seem alien to us. Rising and going to bed with the sun, going to the loo in a bucket which then had to be taken to the town spoil heap, earth floors in the house, except in the best parlour. And in that parlour the main piece of furniture, taking pride of place, was a bed – basically to prove they could afford a bed in days when most people slept on piles of straw.

What struck me was the contrast between this basic lifestyle and the beautiful poetry which issued from his pen. The poetry seems more remarkable still in this context – and perhaps it was an escape, perhaps an attempt to scramble free of the dirty, bloody, gritty reality of 16th century life. They were living in the gutter in those days, but Shakespeare showed them how to look at the stars. 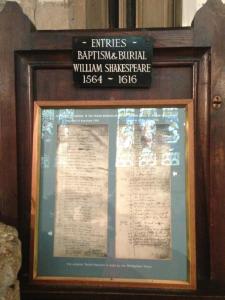 econdly it gave me a glimpse into the way time obscures detail about people – even people as well-known as Shakespeare. He was a writer heralded in his own time, wealthy and successful – though maybe not so highly regarded as his contemporary Ben Johnson (and how many of us go to the theatre to see Johnson’s plays now?) So how is it so little of Shakespeare remains? There are precious few written records of him, precious few pictures we can say for sure were accurate.

I think the answer lies in the fact that respect for the past, for holding onto tradition and history, is something we honour more now than they did then.

Take what happened to Shakespeare’s final home, also in Stratford. This was not the respectable, but far from palatial, home he grew up in – it was the house he bought when he was a rich and famous man. A testament to his huge success. So where is it?

The answer is it has gone completely – disappeared into legend. How can this have happened? Well, after Shakespeare’s death it passed from owner to owner until it fell into the hands of a fabulously wealthy protestant preacher. He didn’t much care for Shakespeare, or frivolous theatre generally. He was angered by tourists who came to gawp at the house. They took cuttings from a mulberry tree planted in the grounds by Shakespeare, so he chopped it down.

Still they would come – to rubber-neck at his home. He had an argument with the council over taxes and, in a fit of pique, had the house utterly destroyed – and went to live in one of his many other houses up and down the country.

So this historically important building, this vital direct link to Shakespeare, was gone. Are we surprised we can’t find more scraps of paper with his name on them. More paintings of his face? We have the plays, they are what matter in the end.

And so, I challenge all of you not just to read Romeo and Juliet this summer (or reread as you will be doing), but to read others of his plays, read other plays in general, Ben Johnson, Christopher Marlowe, Moliere, Sheridan… the list goes on.  Read history through the works of famous playwrights!  Go forth!

Some photos from our last tech of the Seminar Show! Come see it tonight at 7pm in the Black Box!!
HHS Seminar Class presents
Come see "Vanya and Sonya and Masha and Spike" tonight at 7pm in the HHS Blak Box theatre.
Come see the Theatre Production Seminar class’s production of “Vanya and Sonya and Masha and Spike”
Hey Drama Club, it’s Owen Gudex here! So there’s a Pampered Chef fundraiser happening right now that my mom is hosting, and you can help us raise money for next year’s Drama Club season! The money goes to fun activities and super cool stuff from the Drama Club, and we’d really appreciate the support! Share this info with your parents and share it with many others! Anyone can support! Orders are good through Friday!
THE DRAMA CLUB EXCUTIVE BOARD