“For the instruction of the ignorant I will make a list, now, of those details of Shakespeare’s history which are FACTS – verified facts, established facts, undisputed facts ….

Of good farmer-class parents who could not read, could not write, could not sign their names.

At Stratford, a small back settlement which in that day was shabby and unclean, and densely illiterate. Of the nineteen important men charged with the government of the town, thirteen had to “make their mark” in attesting important documents, because they could not write their names.

Of the first eighteen years of his life NOTHING is known. They are a blank.

On the 27th of November (1582) William Shakespeare took out a license to marry Anne Whateley.

Next day William Shakespeare took out a license to marry Anne Hathaway. She was eight years his senior.

William Shakespeare married Anne Hathaway. In a hurry. By grace of a reluctantly granted dispensation there was but one publication of the banns.

Within six months the first child was born.

About two (blank) years followed, during which period NOTHING AT ALL HAPPENED TO SHAKESPEARE, so far as anybody knows.

Then – 1587 – he makes a ten-year visit to London, leaving the family behind.

Five blank years follow. During this period NOTHING HAPPENED TO HIM, as far as anybody actually knows.

Next year – 1593 – his name appears in the official list of players.

Next year – 1594 – he played before the queen. A detail of no consequence: other obscurities did it every year of the forty-five of her reign. And remained obscure.

Thirteen or fourteen busy years follow; years in which he accumulated money, and also reputation as actor and manager.

Meantime his name, liberally and variously spelt, had become associated with a number of great plays and poems, as (ostensibly) author of the same.

Some of these, in these years and later, were pirated, but he made no protest.

Then – 1610-11 – he returned to Stratford and settled down for good and all, and busied himself in lending money, trading in tithes, trading in land and houses; shirking a debt for forty-one shillings, borrowed by his wife during his long desertion of his family; suing debtors for shillings and coppers; being sued himself for shillings and coppers; and acting as confederate to a neighbor who tried to rob the town of its rights in a certain common, and did not succeed.

He lived five or six years – till 1616 – in the joy of these elevated pursuits.

Then he made a will, and signed each of its three pages with his name.

A thoroughgoing business man’s will. It named in minute detail every item of property he owned in the world – houses, lands, sword, silver-gilt bowl, and so on – all the way down to his “second-best bed” and its furniture.

It carefully and calculatingly distributed his riches among the members of his family, overlooking no individual of it. Not even his wife: the wife he had been enabled to marry in a hurry by urgent grace of a special dispensation before he was nineteen; the wife whom he left husbandless so many years; the wife who had had to borrow forty-one shillings in her need, and which the lender was never able to collect of the prosperous husband, but died at last with the money still lacking. No, even this wife was remembered in Shakespeare’s will.

He left her that “second-best bed.”

And NOT ANOTHER THING; not even a penny to bless her lucky widowhood with.

It was eminently and conspicuously a business man’s will, not a poet’s.

It mentioned NOT A SINGLE BOOK.

Books were much more precious than swords and silver-gilt bowls and second-best beds in those days, and when a departing person owned one he gave it a high place in his will.

The will mentioned NOT A PLAY, NOT A POEM, NOT AN UNFINISHED LITERARY WORK, NOT A SCRAP OF MANUSCRIPT OF ANY KIND.

Many poets die poor, but this is the only one in history that has died THIS poor; the others all left literary remains behind. Also a book. Maybe two.

If Shakespeare had owned a dog – but we need not go into that: we know he would have mentioned it in his will. If a good dog, Susanna would have got it; if an inferior one his wife would have got a dower interest in it. I wish he had had a dog, just so we could see how painstakingly he would have divided that dog among the family, in his careful business way.

He signed the will in three places.

In earlier years he signed two other official documents.

There are NO OTHER SPECIMENS OF HIS PENMANSHIP IN EXISTENCE.

Was he prejudiced against the art? His granddaughter, whom he loved, was eight years old when he died, yet she had had no teaching, he left no provision for her education, although he was rich, and in her mature womanhood she couldn’t write and couldn’t tell her husband’s manuscript from anyone else’s – she thought it was Shakespeare’s.

When Shakespeare died in Stratford it was not an event. It made no more stir in England than the death of any other forgotten theater-actor would have made. Nobody came down from London; there were no lamenting poems, no eulogies, no national tears – there was merely silence, and nothing more. A striking contrast with what happened when Ben Jonson, and Francis Bacon, and Spenser, and Raleigh, and the other literary folk of Shakespeare’s time passed from life! No praiseful voice was lifted for the lost Bard of Avon; even Ben Jonson waited seven years before he lifted his.

SO FAR AS ANYBODY KNOWS AND CAN PROVE, Shakespeare of Stratford-on-Avon never wrote a play in his life.

SO FAR AS ANYBODY KNOWS AND CAN PROVE, he never wrote a letter in his life.

SO FAR AS ANY ONE KNOWS, HE RECEIVED ONLY ONE LETTER DURING HIS LIFE.

SO FAR AS ANY ONE KNOWS AND CAN PROVE, SHAKESPEARE OF STRATFORD WROTE ONLY ONE POEM DURING HIS LIFE. This one is authentic. He did write that one – a fact which stands undisputed; he wrote the whole of it; he wrote the whole of it out of his own head. He commanded that his work of art be engraved upon his tomb, and he was obeyed. There it abides to this day. This is it:

Am I trying to convince anybody that Shakespeare did not write Shakespeare’s Works? Ah, now, what do you take me for? Would I be so soft as that, after having known the human race familiarly for nearly seventy-four years? It would grieve me to know that any one could think so injuriously of me, so uncomplimentarily, so unadmiringly of me. No, no, I am aware that when even the brightest mind in our world has been trained up from childhood in a superstition of any kind, it will never be possible for that mind, in its maturity, to examine sincerely, dispassionately, and conscientiously any evidence or any circumstance which shall seem to cast a doubt upon the validity of that superstition. I doubt if I could do it myself. We always get second hand our notions about systems of government; and high tariff and low tariff; and prohibition and anti-prohibition; and the holiness of peace and the glories of war; and codes of honor and codes of morals; and approval of the duel and disapproval of it; and our beliefs concerning the nature of cats; and our ideas as to whether the murder of helpless wild animals is base or is heroic; and our preferences in the matter of religious and political parties; and our acceptance or rejection of the Shakespeares…. 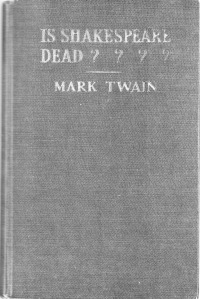 We are the reasoning race, and when we find a vague file of chipmunk-tracks stringing through the dust of Stratford village, we know by our reasoning powers that Hercules has been along there. I feel that our fetish is safe for three centuries yet. The bust, too – there in the Stratford Church. The precious bust, the priceless bust, the calm bust, the serene bust, the emotionless bust, with the dandy mustache, and the putty face, unseamed of care – that face which has looked passionlessly down upon the awed pilgrim for a hundred and fifty years and will still look down upon the awed pilgrim three hundred more, with the deep, deep, deep, subtle, subtle, subtle, expression of a bladder….

[Shakespeare] HASN’T ANY HISTORY TO RECORD. There is no way of getting around that deadly fact. And no sane way has yet been discovered to getting around its formidable significance. Its quite plain significance… is, that Shakespeare had no prominence while he lived, and none until he had been dead two or three generations. The Plays enjoyed high fame from the beginning; and if he wrote them it seems a pity the world did not find it out. He ought to have explained that he was the author, and not merely a nom de plume for another man to hide behind. If he had been less intemperately solicitous about his bones, and more solicitous about his Works, it would have been better for his good name, and a kindness to us. The bones were not important. They will moulder away, they will turn to dust, but the Works will endure until the last sun goes down.”