So, December has started and with three weeks of “The Mikado” rehearsals under our belt, the cast, crews and pit get ready for a much needed break.  We still have a long way to go with music, acting and making the set and costumes, but what we have started is great.  Junior, Mari Duckler describes our current rehearsal process.  “The first few weeks of Mikado rehearsals has been full of excited yet incredibly focused energy. We are not only bonding as an ensemble, but as students who all share a love of theatre. From singing, to tap dancing, to group meditation, the first days of rehearsals have set up an amazing foundation for what is going to be an amazing piece of art.”

This is our second show in the season “Making Sense of Nonsense” and we are once again tackling a witty and nonsensical show.  The plot centers around a runaway prince who falls in love with a girl set to marry another man.  Flirting is illegal and ridiculousness continues.  Director’s Assistant and Senior, Sam Ginkel, “Making sense out of nonsense is the only way I can describe these past few week. Grace, and I (with the help of Allison) helped create choreography for a song that I didn’t know the lyrics of until the moment before. Making sense out of nonsense indeed! Then on Thursday, we found ourselves talking about wings and capes, 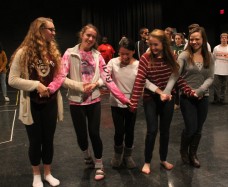 pixar and disney, and the Comic-Con aura that we want Titipu to represent. We have swam through a great desert, and climbed the shortest blade of grass. We have danced when the music never even started, and we flew when we were still on the floor. We made sense out of nonsense, but we made even more nonsense out of sense.”

Some of the nonsense, Sam is talking about is the lyrics the cast has created to update this 130 year old musical.  Sam Faber, who plays a pompous government official named Pooh-Bah says, “The first week of rehearsals allowed us as a cast to envision what direction the show is heading in, moving away from Japanese stereotypes. Writing new lines to songs and tweaking dialogue brought us closer together as a group, which is essential to putting on a good show.”  The men come back from music rehearsal with new lines and lyrics, while the ladies continue to add ridiculous props to their songs.  Maggie Collins who plays the leading lady Yum-Yum, laughed and spoke, “The Mikado is going to be hilarious. Rehearsing is a lot of fun because we add such a uniqu

e twist to the classic musical. It’s so goofy! The energy builds as we continue to learn the music and scenes in the show.”  The changes she speaks of are the additions of Razor scooters, Disney characters, and lyrics specific to Homestead and Mequon.

Junior, Andrew Lococo smiled when her said, “We have been making great strides throughout the early stages of the rehearsal process. As always, it’s been a great experience thus far! It’s been great getting to know some of the many new faces in this show too.”

Last Chance to see "Hello, Dolly!" today at 1pm!!!
Come see "Hello, Dolly!" tonight at 7pm!!!
The various stages of "ready" you see during Mic Check.
The Stage Manager and Production Manager placing the iconic staircase in "Hello, Dolly!" They have to re-position it every night because it moves slightly each time it's rolled on and off.
In honor of "Hello, Dolly!" opening tomorrow and Black History Month starting today I want to talk about Pearl Bailey, an amazing Dolly Levi.
We could watch Mr. O conduct all day. He just dances with the orchestra, it's so wonderful!