Homestead High School was eligible to enter this amazing program for the first time this year.  We just heard the news that out 2015 musical The Mikado won 8 Tommy Awards! 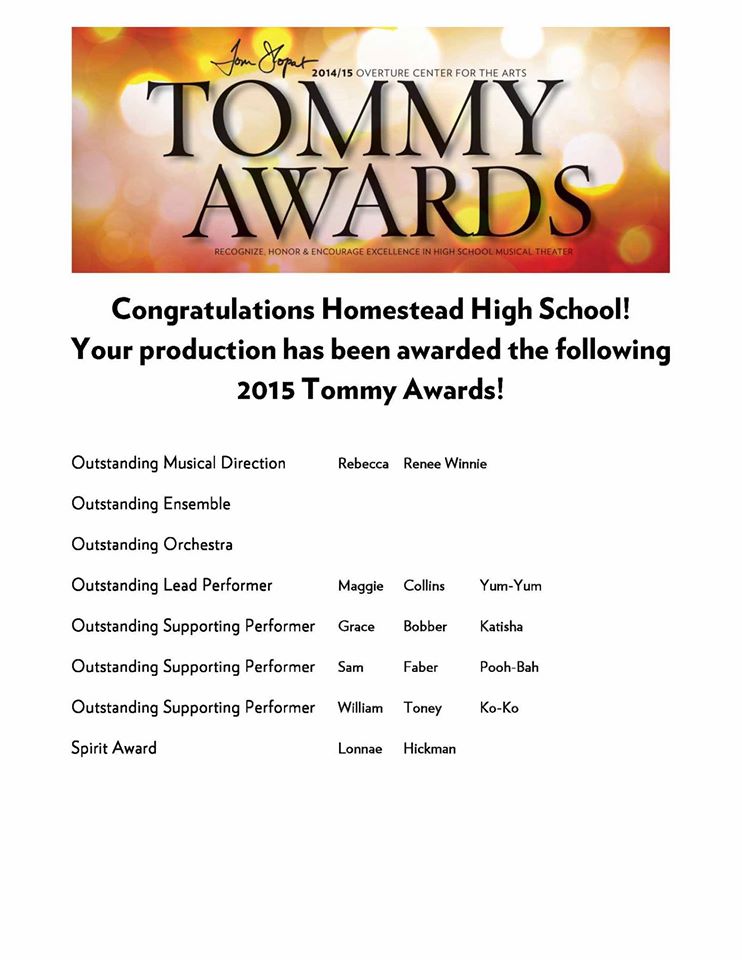 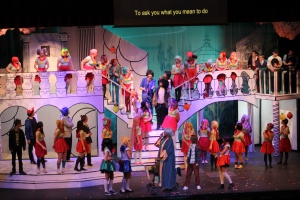 “The ensemble for this production was essential to the show’s success. Both male and female groups worked extremely well to create an identity within each sub group, but also performed very well as a complete ensemble in large group numbers. “If you want to know who you are” was a memorable introduction to the male ensemble, as musicality and energy were both strengths of the group. The ladies countered on an equally impressive level with “Comes a train of little ladies.” When both ensembles performed together there was an overwhelming sense of focus and commitment to the scene. As a whole, the ensemble can continue to bring a lighthearted, boisterous energy to each scene.”

“Maggie Collins (Yum Yum) – Maggie had a really nice performance. This interpretation of the show lent itself nicely to this character. Her scenes with Nanki-Poo were solid with really great chemistry between the actors, but the trio work with her and the other women was outstanding.”

“Sam Faber (Pooh-Bah) – Sam had to juggle a lot of hats (literally) in the character and he did it quite well. His stage presence as Pooh-Bah was pretty interesting as his true motives seemed hidden and exclusive from each of the many titles he held. It’s always a joy to see an actor having a blast on stage.”

“Grace Bobber’s Katisha was simply amazing. Her “ugliness” was so incredibly beautiful to me. I couldn’t wait for her to come back onto the stage to see what choices she was going to make next. Her singing and acting ability made me want to watch her constantly. The character she created was full-on crazy with just the right amount of humanity and decency to make me want to get to know her entire back story.  Her singing voice is unbelievable for a high school student. The difficult material seemed easy in her hands and the acting through song was truthful to the character she created. Her expressions, pitch, lyrics were really wonderful to hear and watch. All the basic skills needed for a professional actor/singer are there and then some. An absolutely perfect choice to complete a high school career!”

“William Toney (Ko-Ko) – I don’t know how to properly say how much I adored this performance. I love the character that William created. It was larger than life. He was absolutely hilarious and “As some day it may happen” was just amazing. The bit with cuing the orchestra was awesome.”

“Ms. Rebecca Winnie’s musical direction and orchestra were perfect in sound, balance and beauty. They never overwhelmed the onstage talent, but possessed an amazing talent of their own that showed professionalism at every turn. Involved sometimes vocally, their timing was perfect, but musically — Wow! What else can be said? The accuracy and interpretation under Ms. Winnie’s direction was simply beautiful. Ms. Winnie’s direction of the onstage talent was also brilliant in its balance. Harmonies were beautiful. The full chorus sound was fresh and energetic and clear. The solos and small group numbers were on-pitch and interpreted in full character. Because of the difficult pacing and musical style, the cast was very dependent on Ms. Winnie’s timing and relied on her direction.”

This award is given to a student from each of the participating Tommy Awards schools. The recipient is selected by the cast and crew of your production. The Spirit Award goes to a student who is a team player, is professional and prepared and who inspires others.  For the production of “The Mikado,” the cast and crew voted on a spunky sophomore, Lonnae Hickman.