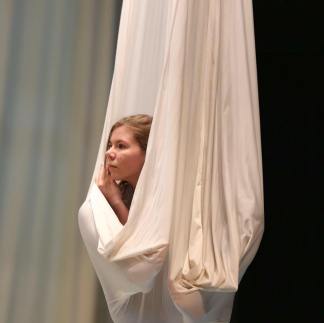 Hey, friends! My name is Megan Siatczynski. I’m currently acting as a lost boy in the spring play Peter Pan and the Girl who Grew Up. I would say that acting is my life. I act wherever I go. I simply have no idea what I would do without theatre. Acting is also my little safe place. I can walk into the Black Box theatre and I don’t have worry about what’s going on in my life. I can focus on one thing and not a bunch of things. I also love to make people laugh and smile. When I act, I can also express myself in any way I like. And that’s really cool that I can do that.

This production is completely different from any Peter Pan play or movie I’ve ever seen and I believe that that’s a good thing. I believe that Ms. Figg-Franzoi has turned the tables and made Peter Pan a better story to tell. It will give the audience something new, something to experience, something to look back on. The set is amazing, the lights are awesome, and the actors are the best people I might ever meet. They are really accepting with whatever you do. 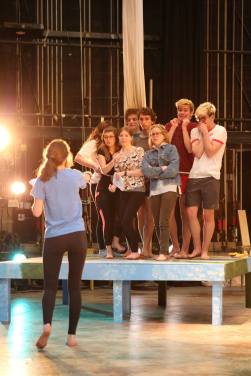 In Peter Pan, I play Tootles, the youngest lost boy. He is both easy and difficult to portray. I would say the easy part of portraying Tootles is being able to just have fun and run around, which is basically a lost boy’s job. The difficult part would be remembering that Tootles is 11 years younger than you. Sometimes you’re not exactly sure what a 4 year old lost boy would say or act in certain situations.

I’m not sure if this will sound cliche or not, but I want to act as a career. I know that actors go through a lot of stress and drama, but all I do is ignore all the bad stuff and focus on the good. I may also would want to become a playwright or a screenwriter because I have this weird obsession with just writing random scripts. Writing scripts is so much fun. It gives me a chance to use my creativity and to use my abnormally big imagination.

If I had a magic wand, the next play I would want to perform would be anything Disney. Disney is basically my life. I love all the magic and creatures and everything. And knowing that I could play a part gives me great joy that I could get to help reenact a Disney movie or book.

Before I go on stage or perform or anything, I also say one thing to myself: I don’t care about what anybody thinks. And it’s true. I believe that you shouldn’t worry about looking or acting like a fool because that is the joy of acting. In acting, you can be whatever you want.

Written By: Megan Siatczynski (Class of 2019)