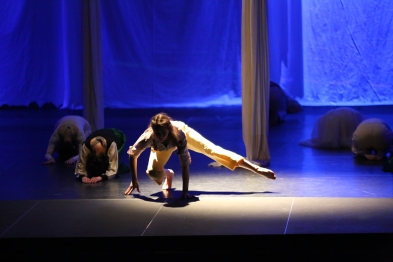 The Tempest is a play written by William Shakespeare and by many considered to be his last written work.  The main character is Prospera who was once the duchess of Milan but was overthrown by her sister Antonia.  After her throne was taken Prospera was cast out on the sea and shipwrecked with her son Mirando.  Years later, after Prospera has learned magic from spirits on the island, she senses her sister Antonia on a ship accompanied by the queen Alonsa (who helped overthrow Prospera), Alonso’s daughter (Ferdinand), and many other boat guests and workers.  Prospera conjures up the tempest to wreck the crew on her island.  Once separated the shipwrecked the boat members travel around the island and are at the mercy of Prospera’s magic.  Ferdinand and Miranda fall in love while Alonso and Sebastian (the queen’s sister) plot to kill the queen, and Stephano (queen’s butler) and Trinculo (queen’s jester) attempt to kill Prospera after being convinced by Caliban (Prospero’s servant)

The set consisted of white curtains in a half circle across the back of the stage, then three white silks hanging off to the stage left, and a lyra hanging on stage right.  They used white for the whole set so they could project colors and texture onto the fabric.  The simple set also made actors stand out.  The light color everywhere gave off an open atmosphere but with lighting effects the set could also be made dark/menacing or express other moods.  With the layered curtains running along the whole back of the stage actors could enter from practically anywhere, entering in a dramatic or inconspicuous fashion.  The time period was present day but the set itself didn’t express any specific time making it versatile and usable for any time setting.

The lighting was a main feature of the show since the entire set was white curtains with the exception of a few props.  They used the curtains as screens to project different colors, light up actors or areas of the stage, or even shapes to add more meaning to Prospera’s conjuring/magic.  There was even a shadow play which brought to life Prospera’s flashback and retelling of her and Mirando’s past.  Sound was utilized as full pieces of instrumental music but was also very obvious during the actual tempest and “underscoring” of dramatic scenes.  For scenes without a lot of talking instrumental music helped convey emotion and feelings, such as the part where Mirando and Ferdinand fall in love.  Sound effects, however, were used mostly during the tempest’s conjuring and when it destroys the queen’s ship, loud clashes of thunder and lightning produced the feeling and effects of the storm. 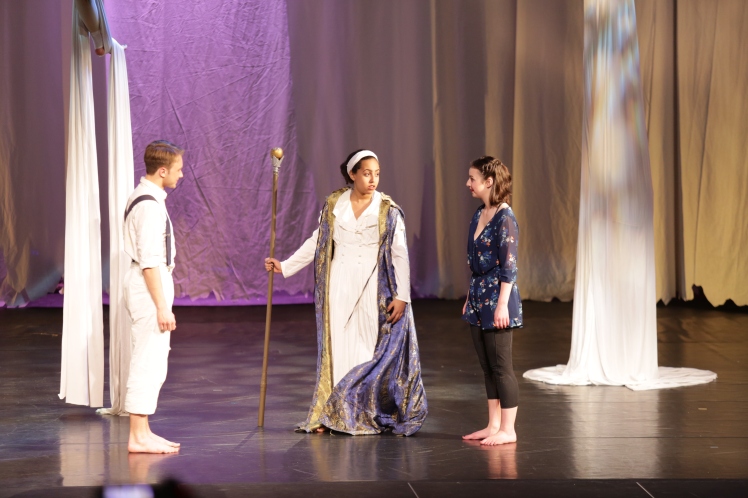 Costumes for certain characters needed to reflect physical aspects of their character that was different than the normal human.  Caliban and the spirits making Ariel both needed abnormal dress to help the audience imagine Caliban’s monstrous form and Ariel’s celestial body.  For Caliban the two actors had large green pants with decorated tops that matched each other to show they were one “person”.  The Ariel’s had greenish leotards that were all alike but differed slightly from person to person and elaborate green wigs.  The spirits Iris, Juno, and Ceres needed extravagant and dramatic clothing because they are meant to be gods.  The hellhounds used cardboard dog heads to show their canine body but used acting and movement to show all other aspects of a hound.  Other characters wore clothing fitting their character (queen in dress, guards in coats, sailors in coats and work clothes).  Finally the spirits of the land all wore white clothing and colorfully painted faces.  The white helped convey that they were extensions of the land as well as helping them blend in or reflect the colored lights used in creating the mood.

The shadow play was created by projecting a white background actors walked or moved in front of the light to create a shadow.  This was used during Prospera’s flashback to create a picture for the audience to follow while keeping Prospera and Mirando on stage.  Another special effect was the use of aerials and lyra as a focal piece of the play.  Prospera’s staff was used during the show to influence her magic but was broken in the end to represent her giving up her magic in order to go back to her old life as duchess.  Instead of creating multiple staffs that would be broken once and thrown away they used one staff that was never broken and then another “breakable” staff was made using two pieces which were connected together by a small wooden peg that could be broken by Prospera and then reused at a later time.

I really liked the aerial silks and lyra used by many different characters throughout the show.  It made up a huge piece of the production since it was the center focus of the stage and set itself.  The routines and moves Ariel and other characters did on them were impressive and looked really difficult to do.  The unique movement also helped add something to the show, creating moods and emotions through the stunts on the lyra and aerials.  Overall it was really cool to see and be a part of, and despite the lack of set pieces it turned out very colorful and exciting.