As I put on yet another layer of black grease paint and eyeliner on my face, I tried to remember how I got here, to this moment. How a subtle and loosely constructed conversation at a coffee shop led to staring into the glowing hot incandescent light bulbs of a dressing room in a college theater basement. It’s strange to think that musings from a notebook about mosquitos, light, and sandwiches became the show we grew to love so much, became the show adjudicators praised us for, but that’s exactly what happened. 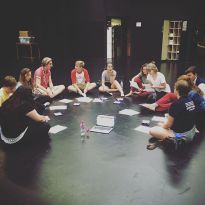 Now let me be clear, it wasn’t just a point A to point B transition of an idea to reality, the creative process was messy, erratic, and often hard to keep up with. We had so many ideas and hours worth of content but only 40 minutes to work with, in the beginning, it seemed impossible. As we endlessly debated over script changes and blocking, part of me wondered if taking this class again was the right choice. It was such a great unknown, something equally enriching as it was stressful and it took some time to adjust, but I can honestly say I made the right choice. Knowing what I know now, if I could go back I would do it in a heartbeat; however, it took a while to get there.

One of the first things we did was talk, just sat around a table and shared ideas. I had come prepared with the massive number of 2 ideas, and they were pretty minimal at most. I thought that because the characters in our story were exposed to nothing but darkness and the rocks and silt of the cave, they should be used as names. I suggested Ash, Clay, and Amethyst, thinking that those sounded the closest to real names. In the end, Ash was the only name that stuck, but the idea of naming people after sediment and such carried through the whole show. The other idea was to introduce light into the story through something subtle and innocent: a firefly. In the piece I wrote originally, Ash sat alone swatting mosquitoes and other bugs away in the dark. Just as they went to swat another one, it lights up. Ash becomes fascinated with the tiny light and follows it further through the cave, eventually encountering an entire cluster of fireflies, lighting up the entire space. In the final version of the show, pieces of that story still remain, and it’s something I am incredibly proud of.

Eventually, our meetings moved from picnic tables to classrooms as the school year began. So much of our show was really up in the air. In fact, we didn’t even have a cast list until the beginning of October. We spent well over a month just creating a scene or a sequence at a time, people would show up with an idea, grab some actors, and try to replicate their vision. Over time, we began dragging scenes and choreography from point to point to form our original skeleton of a show. Scripts were written and rewritten time and time again, costumes were made and changed and destroyed. Character ideas came and went, even names changed. It was like making a collage from magazine clippings and hoping the result looks cool. Luckily for us, it did.

So here we are, a group of teenagers in tights and on stilts, with goggles and fairy wings, capes and dragon tails. The ultimate collage of actors, dancers, artists, and students alike, covered in sweat, setting spray, and makeup, singing in a concrete cavern at a college. Minutes away from sharing our story, this little idea made into an expansive production, and all I can think is how did we get here?

The truth is, I don’t know how we got here, but I’m glad we did.

What a great crew, they were on fire this week!
Opening night is tomorrow and the cast and crew cannot contain their excitement! We hope to see you all at the shows!
One more rehearsal until opening night! The cast and crew are beyond excited to show you all the show they put together!
Are you ready for this weekend?!
Come see “As You Like It” this weekend at HHS. Friday and Saturday at 7pm and Sunday at 1pm. Tickets $7-$8
What a wonderful first day of tech for As You Like It! 4 days till opening night!!