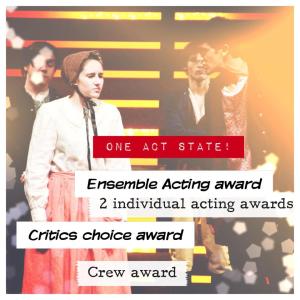 This past weekend, Homestead High School’s cast and crew of “The Crucible” headed off to the One Act State Competition.  Out of over 50 schools, Homestead brought home the highest honor, the Critics Choice Award as well as four other awards.  Danielle Goodman won an Individual Acting Award for her role as Abigail Williams, while Max Ginkel won his Individual Acting Award for his portrayal of John Proctor.  The whole cast took home the Ensemble Acting Award, while Stage Crew walked away with the Crew Award for their amazing set and imaginative lighting and sound creations.  This is Homestead High School’s fourth year in a row where they won the Critics Choice Award.