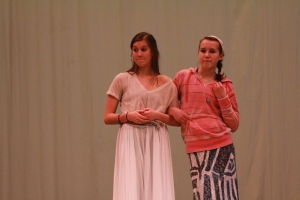 A dancer since the age of five, I have always thought of the stage as my home. But through my participation in the musical, Brigadoon, I have discovered a new love of the stage – in singing and especially in acting. Now, I want to take as many acting classes as I can get my hands on, because I want to join in on that part of Homestead Theater (the classes) that truly makes it great. In the theater department, I am challenged, encouraged to grow, and forced out of my comfort zone to be someone who is so much like me and yet so different. Meanwhile, I have formed some amazing new relationships both on and off the stage. As a freshman, I was more than nervous going into the musical, but now I realize there was nothing to worry about. Although I am in the chorus, I feel like I have an important role to play, a character to form, and most days it seems like rehearsal won’t come fast enough. I cannot wait for opening night, but then again, I simply don’t want Brigadoon to be over.

One thought on “Brigadoon Musings”