Romeo and Juliet is one of Shakespeare’s most popular plays, written around 1595 – 96, although there is no direct evidence of specific performance dates before the restoration. Nevertheless, the early printed text suggest that it was popular from the start; the first quarto of 1597 claims that “it has been often ( with great applause) played publicly, by the right Hon. the Lord of Hunsdon his servants”; the Second Quarto, two years later, says it is “newly corrected, augmented and amended as it has been sundry times publicly acted by the right Hon. the Lord Chamberlain his servants,” While the third quarto, after the ascension of James I, when the Lord Chamberlain’s men became the king’s men, repeats the claim that “it hath been sundry times publicly acted by the Kings majesties servants.” We know that the company comedian Will Kempe played Peter, since “Kemp” appears in places instead of the speech prefix. The stage directions also tell us something about how the play must have been staged, requiring an upper staging, a bed and the discovery space, and the stage properties required. There is good evidence that the company’s leading actor, Richard Burbage, played the part of Romeo.

The first recorded performance after the restoration was by Sir William Daventant’s Duke’s Company at Lincoln’s Inn Fields in 1662.

In a later revival, Shakespeare’s plays were altered. In 1677 Davenant’s Company staged an adaptation In which the plot of Romeo and Juliet is transposed to ancient Rome and given a contemporary political slant, being set against the background of Civil War. All throughout the restoration period Shakespeare’s plays were rewritten and redrafted to fit the audience of the time. Everyone felt that his language was “jingle and quibble” 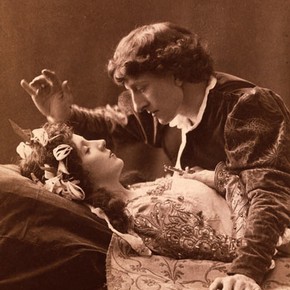 Then in the 1800s we travel to a world of spectacle and fantasy. At this time reaction against visually spectacular productions came With William Poel and the Elizabethan stage Society, dedicated To producing Shakespeare’s plays, employing full text and original staging conditions as far as possible. The venture was not a financial success, but its influence on a new generation of directors was long-lasting and profound. Romeo and Juliet was the society final production in 1905 and whole cast two teenage unknowns into the lead roles. The production lasted only four performances and not everyone was convinced – the academy’s reviewer adverted to the romantic notion that Shakespeare can never adequately translate from study to stage – But the critic J.C.Trewin recognized the significance and found that, for the first time it became endurable. The lovers instead of cold technique, brought the ardor of extreme youth.”

In the 20th century the problem was finding leading actors who looked sufficiently young to be credible in the parts while experienced enough to do them justice. In 1960 Franco Zeffirelli, the Italian designer and director who had established his reputation in critically acclaimed productions of Italian opera Covent Garden in the late 1950s, was invited to direct Romeo and Juliet for the old Vic company. This was his first Shakespeare play. He wanted to appeal to young audience and to bring out the passion of the play. He cut everything that he regarded as extraneous, which didn’t add to the place narrative drive. In total he cut about thousand lines, roughly 1/3 of the text, and concentrated on delivering a romantic, fast-paced production. The production was a huge box office success and went onto two were the world. Zeffirelli drew on his experience of staging this production when making this popular and influential 1968 film version.

Over the course of four centuries, the play has undergone translation and transformation not only to settings across different languages and media, including more than 30 operas, musicals, ballets From film and television adaptations to the Marvel comics uncanny X-Men volume five: she lies with angels.

Romeo and Juliet has been one of the most frequently filmed of Shakespeare plays. The best-known and most successful and most widely available films are Franco Zeffirelli’s 1968 version and Boz Luhrmann’s of 1996. Both Zeffirelli’s and Luhrmann’s films are Visually brilliant but quite different in setting and filmic approach. Zeffirelli re-creates medieval Verona, where is Luhrmann transports the scene to Verona Beach, a suburb of modern-day America.

Both films have attracted much critical attention, not all of it favorable. Luhrmann’s in particular has raised critical hackles: “can Shakespeare’s tragedy withstand the shock of the modern and the playful inventiveness of such postmodern tomfoolery as this movie employs? It’s a judgment call at best.” For others, though, it was a brilliant opening up of Shakespeare to young audience.

Directors have not often chosen to make reference to an Italian setting, despite the very specific locale of the play. Creating a coherent community and appropriate atmosphere for the place action has become more important than representing the play for a modern audience. This less specific attention to Italian references demonstrates an emphasis on the accessibility of the play. I alone have seen productions of Romeo and Juliet set in the 1980s with a yuppie field, the 1950s, post-apocalyptic, and in the traditional Elizabethan. In every case, I enjoyed the setting, while finding faults with them. But that is what we will always have in this world, our own opinions, and thoughts of how the theater should play Shakespeare. So now we must decide how we, Homestead high school, will put on our production of Romeo and Juliet.