It was once believed that one’s gender determined what was expected, allowed and valued in us. To be a boy or a girl meant behaving in a certain way and possessing certain qualities. But society today is in transition, and people have now begun to question these age-old assumptions.  Boys play with cars, trains, and tools. Girls play with dolls, dress-up, and princesses. For many people this rings true but what happens when a boy wants to play with dolls or a girl is more interested in playing with cars? For some people this may make them feel uncomfortable. I think we must ask ourselves why it makes us uncomfortable.

I’ll be honest with you all, when I was rewriting Romeo and Juliet, there were times where I was uncomfortable with the mother Capulet yelling at her son.  And I still use the wrong pronouns at rehearsal sometimes.  Let’s face it: despite all of the advances toward gender equality, many people still expect different things from men and women.  Hopefully with Romeo and Juliet we not only allow our audience think differently, but also allow ourselves to learn as well. 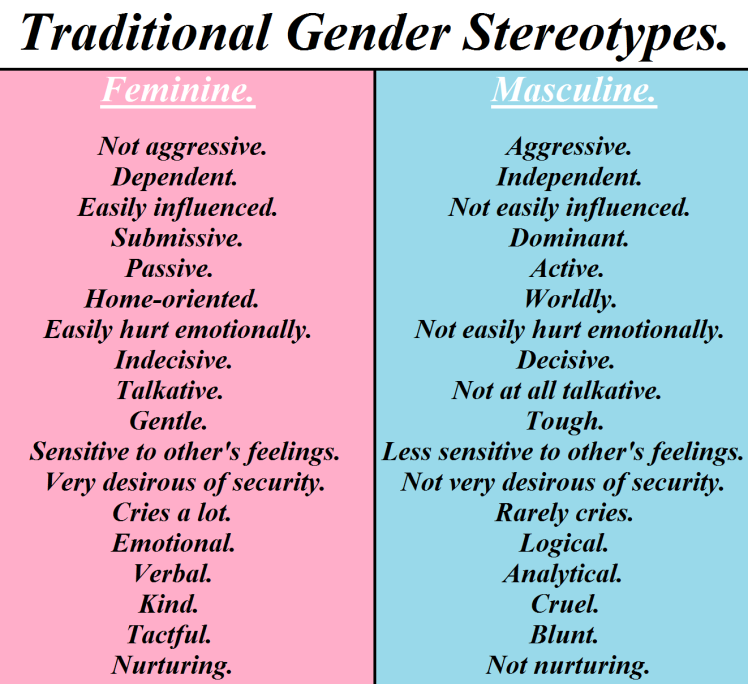 With this play, we are switching these!  The girls are aggressive, independent, blunt, tough, and active, while the guys are not aggressive, dependent, tactful, kind, gentle and passive.  In a perfect world, non of these words would be attributed to a gender, but to specific people.

How can we change our thoughts?  How can we help?

Don’t stereotype: We all have a tendency to stereotype in order to simplify our social world and make it seem more predictable. But these stereotypes often lead to errors of judgement. Treat people as individuals rather than as stereotypes.

Be open to new ideas: Stereotypes narrow our perceptions and prevent us from genuinely thinking about new ideas. Keep an open mind when thinking about gender roles and don’t be afraid of thinking out of the box.

Respect individuality: We ourselves are often the most critical of our peers who don’t ‘fit in’ with our idea of what it is to be normal. Identify your own pre-conceived notions and respect the individual expression of your peers. Try to understand their perspective and learn to empathise.

Question unsaid conventions: Gender roles aren’t determined biologically; we learn them from our family, the media and the community at large. Think critically about unsaid social norms and rules; questions your beliefs, and those of others around you.

Do your part in the family: The family is often the setting where gender roles and expectations are most clearly defined. Rather than perpetuating that cycle, it’s important for each of us to pitch in in whatever ways possible to help out our family members.