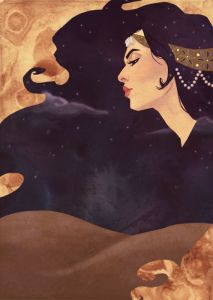 The original, authentic text of the Arabian Nights (aka Alf Layla wa-Layla, or the Tales of a Thousand and One Nights, or just the Nights) is a mythical beast. There are far more than a thousand and one nights, for the thirty-four-and-a-half stories in the fourteenth or fifteenth century “core” body of the Nights were soon supplemented by other tales in Arabic and Persian, from the culture of medieval Baghdad and Cairo, and then in Hindi and Urdu and Turkish, tales carried by pilgrims and crusaders, merchants and raiders, back and forth by land and sea. And then came the narratives added by European translators, as well as the adaptations (in paintings and films) and retellings by modern novelists and poets. There is no agreed-upon table of contents. As Marina Warner points out, at the start of this enchanting book, “the stories themselves are shape-shifters”, and the Arabian Nights, like “one of the genies who stream out of a jar in a pillar of smoke”, took on new forms under new masters. The corpus lacks not only parents but a birthplace; Persia, Iraq, India, Syria and Egypt all claim to have spawned it. So the Thousand and One Arabian Nights are not only not a thousand and one but not (just) Arabian.

It’s not an artichoke – peel away the leaves of the later, accreted, interpolated layers until you find the original centre – but an onion: peel away the leaves and at the centre you find – nothing. Or, perhaps, everything; lacking a birthplace, the Nights also lack a grave: “The book cannot ever be read to its conclusion”, says Warner: “it is still being written”.

Yet, within the Arabic tradition, the tales of the Nights were discounted as popular trash, pulp fiction; despite numerous allusions to the Prophet, and quotations and echoes of the Qur’an, they were “too much fun, often transgressive or amoral fun, to be orthodox or respectable . . .”

Stranger Magic: Charmed states and the “Arabian Nights” explodes two myths about the Nights: that only the Arabic stories are the “real ones” and that you need to know Arabic to understand the Arabian Nights. The two ideas are mutually reinforcing: if there were a single ancient Arabic text, one might well want to read it in the original language; but since there is no such text, the stories in all languages and translations are fair game for all of us to respond to (a creative process in which, as Borges put it, “the translator is being translated”). The full spectrum of stories certainly yields spectacular insights in the hands of Warner, Professor of Literature, Film, and Theatre Studies at the University of Essex, who knows more than anyone alive about the uses of myth and folklore in literature, fine arts, and film. She has written eye-opening books about fairy tales about women (From the Beast to the Blonde: On fairy tales and their tellers, 1996) and men (No Go the Bogeyman: On scaring, lulling, and making mock, 2000) and spirits (Phantasmagoria, 2006) and much else. She is fluent in a number of European and classical languages.

Good writing, good storytelling, is the heroine of this book, embodied in the heroine of the frame story within which all the other stories are gathered: Shahrazad (Scheherazade). The cuckolded and embittered Sultan Shahriyar every night marries a virgin whom he beheads in the morning; Shahrazad volunteers, but after they have slept together she tells him a story that is still unfinished at dawn; the Sultan postpones her execution to the next day, and the next, on and on; in the course of the stories, she cures the Sultan of his misogyny. This is a story about storytelling, feminist protest, dreams, sex and violence. For Warner, it is the springboard for a meditation, threaded throughout the book, on writing as an amulet, a talisman; for writing as magic; and for the story within a story.

Wendy Doniger teaches at the University of Chicago. Her books include Dreams, Illusion and Other Realities, 1986, and The Bedtrick: Tales of sex and masquerade, which appeared in 2000.