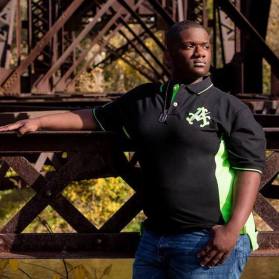 Hi, my name is Nick Gardison and I got into theatre my junior year and my only wish is that I would have gotten involved sooner.  I play the Narrator,Candleman, Eggman and I´m also a part of the ensemble.  The Eggman is different from me because I don’t like eggs and….yeah. It´s easier to play different characters rather than myself because I´m a really good imitator and I can make my imitations very funny.  I’ve been doing a lot of singing and choreography and it´s been very enjoyable. I think my little sisters would really enjoy the show because they are some absolute Disney freaks, so this would be the highlight of their lives. 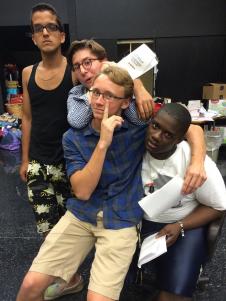 I wanted to be in this show because I just love theatre so much and the people who I get to share it all with. I also wanted spend my senior year with drama so I´ll have wonderful memories to look back on.  The challenges in the show is trying sound french and do what the 18th century french would do meaning no high fives, no thumbs up. Bottom line, NO 21ST CENTURY AMERICANS ALLOWED!!!!!

One thought on “Meet the Artist: Nick Gardison”

Just finished our over night lock-in for the musical! Cast, crew and pit gathered together to figure out who murdered Figg! Oh no!!!
Pretty photos with our awards!!
“Rosencrantz and Guildenstern are Dead” swept the State competition. They won eight awards:
Break legs at State, One Act!!!
Come see the One Act Showcase tonight at 7pm!!! It’s free!!!
Our Seniors fall play senior year vs. their fall show their freshmen year...