All was quiet in the nursery with John and Michael tucked in bed and sleeping.  Suddenly a tinkle of bells is heard and light zooms in though the window, flying about.   A fairy has entered the Darling children’s nursery, and not just any fairy… this is Tinkerbell.  The small fairy is in search for the star-reader… this is her last chance to find the magical object of lore and save Neverland.   Going through jars and drawers, Tinkerbell is frantic. 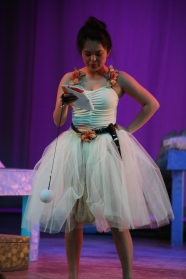 A sliver of gold light from the door opening disrupts the Moon’s watchful glow of the Darling children.  Wendy is awake and trying to sneak back into the nursery.  She really did try to sleep in her own room with her own bed, but the bed seemed to swallow her whole and the room was too silent.  Where were the sounds of John’s grumblings and Michael’s quiet snores?  Tip-toeing back into the room, Wendy picks up her favorite teddy bear, Darren before wandering over to her old bed.   Tinkerbell quickly squeezed herself under a pillow to hide.

A gust of wind rattles the nursery window and both Wendy and Tinkerbell wrap themselves in their arms for protection.  S storm is brewing, lightning and thunder clatter the windows until the latch unhinges and – in a gust – in tumbles a young boy.  It is not a glamorous entrance: he trips, he stumbles and he lands in a heap behind Wendy’s bed.

Ducking behind her bed, Wendy hides on the other side on her bed, away from the boy.  In the second, Wendy knows tonight starts her adventure.  Tinkerbell on the other hand is not pleased her friend followed her to the Darlings nursery, she was trying to be stealthy.

“Tinkerbell?”  The boy whispered in the darkness, “Ow – my bum!” Popping his head up from the bed, he stares into the eyes of a girl.  Their eyes meet for the first time and both children push away to hide on either side of the bed.

In her crumpled state behind the bed, Wendy gasps, she does know the boy.  He was the one she’d been seeing in her dreams, “You’re the boy -” 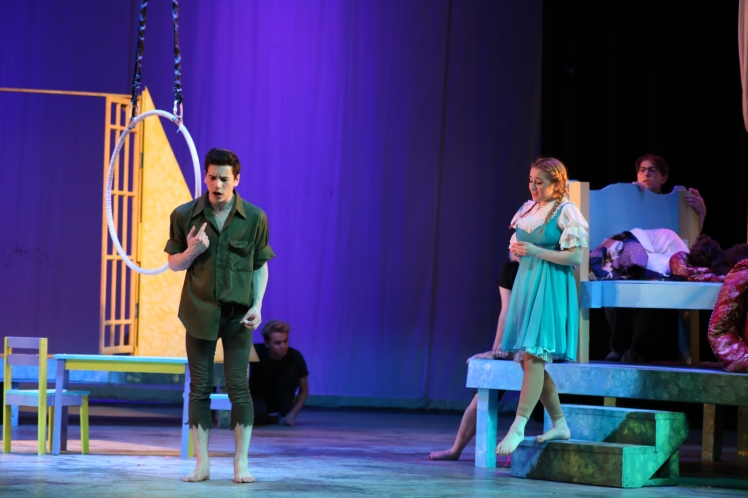 Without warning a jangling of bells is heard and a bright light zooms past Wendy and toward the boy. Eye sparkling and with a quick laugh, the boy catches the light and throws it into a jug, trapping it.  The light is Tinkerbell and she is not happy as she shakes the jug violently. Arming herself, Wendy grabs a teddy bear and wields it as if a weapon at the boy and the jug.

Laughing at the jug, the boy proudly exclaims, “Now I’ve got you!”

Dropping the teddy bear, Wendy realizes she’s heard that laugh before, “Why, you are him”

Finally looking t Wendy, the boy asks, “Who am I?” Wendy goes to touch the boy to see if he is real, but he pulls back. “You mustn’t touch me; no one must ever touch me… ”  Scrunching up his face, embarised, the strange boy runs back to the window, “I’m going to go now.”

“I’m Wendy – Wendy Moira Angela Darling.” Hoping the boy will stay, Wendy thinks of the only thing to make him… telling him her name. Wendy takes a steps towards boy only to watch him take two steps away from her. “Are you afraid of girls?”

Stepping forward boldly exclaiming, “No.  I’m not afraid of anything.  You look like a princess… What?” In his embarrassment he loses hold of the jug and releases Tinkerbell who flies around the room and into a drawer.  Wendy watches the boy trying to look cool as he scratches the back of his head, smiling.

Smiling in wonder, Wendy inquires, “Who are you?”

“Huh? What?” Suddenly, the boy launches himself up into the air, flying around the room, “Oh, I’m Pan.  Pirate Killer, prince of the seas, demon of the skies – the most savage, the incredible, unbeatable and most majestical- ” Landing with suave charm, he introduces himself, “Peter Pan.”  As he goes to lean against the bed, Peter misses and stumbles.

Laughing, Wendy exclaimed, “The most savage?”

A shadow appears and laughs in Peter’s place.  Stunned and growing with excitement, Wendy walks around the shadow transfixed. ” Wow!  That is amazing, he is totally separate.  How is that…”

“I’ve got more!”  Peter perches on Michael’s toy chest, proud that she is amazing.

“More than one shadow?”

At Wendy’s excited nod, Peter laughs and more shadow join him through the window, tumbling and dancing.  As they dance about the room, Wendy giggles with glee.  Waltzing with one and performing a small jig with another, the shadow’s are just as enamored by Wendy and she is by them.  Finally Peter calls them all back to him and they disappear.  Leaning against the nursery window, Peter regards Wendy with a watchful gaze.

“Why aren’t you scared?”  Peter finally voices his question.

Jumping from the window to the rocking horse in the middle of the room, Peter starts to ride, “Don’t most girls scream and faint?”

“Apparently, I’m not most girls.” Wendy snorts as she plops down on her bed.