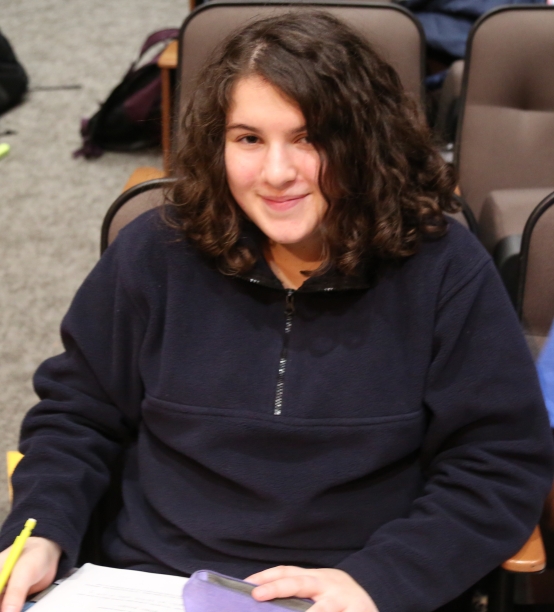 Hello cool kids, my name is Katrina Liberman. I’m currently a sophomore at HHS. My current interests are pretty simple, I love watching entire shows on Netflix after rehearsal and then complaining that I didn’t get enough sleep, I love convincing myself that I’m healthy whilst eating chips and guac, and most importantly, I love fiddling with the silks during rehearsal when I should be working on memorizing my fish song.

In The Little Mermaid, I’m the head chef. That means that every day as the hungry cast members walk into the auditorium, it is my job to feed them the delicious food I have spent all day making. I perfectly craft my diverse spread of (vegan) fish dishes during A lunch, and prepare the copious bags of skinny pop with which I feed the masses. Occasionally, I participate in rehearsal, in which I truly hone my craft alongside my trusty assistants. 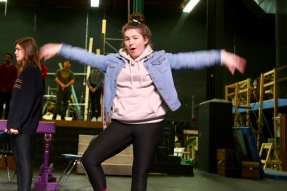 I joined mostly for the 9 am weekend rehearsals, but also for the free tech dinners. As the Head Chef, working so hard for so many hungry teenagers and adults can be stressful, so taking a week off to really focus on my silk fiddling is quite enjoyable. Of course, I cannot forget that I joined because of my genuine love of the (cooking) arts, it is the one place where I can always feel home. Theater (the kitchen) is my place.

If it is ok, I would like to comment on the Great Cart Falling of 2019. I was simply minding my own business in the wings, observing as two of my finest chefs attempted to control Ariel on a cart with which she chose to propel herself on. However; something went wrong! Ariel (Bella Gabor) launched herself quite quickly onto the cart, and slowly, yet daringly, fell to her doom and landed directly on the stage floor. I cannot lie by saying I did laugh a little bit, it was quite entertaining.

All art comments on something, aligns itself with current issues.  How does The Little Mermaid comment on current social or political issues and has it influenced you this winter?
I feel as though The Little Mermaid secretly connects to the vegan movement, despite what everyone tells me. Hear me out, Ariel has been a fish thingy before, so she understands what it’s like to be constantly threatened by humans trying to catch her community. If I may, I would like the cite Act 1 Scene 8, where Triton says “They catch us with their hooks…” clearly, she exhibits empathy towards fish. During the Palace scenes, Ariel is disgusted by the fish on platters presented to her, showing that she is in fact, at least a vegetarian. This may be a slight stretch, but I do feel as though my argument is supported.

What do you hope the audience will be thinking about in the car as they drive home after this show?
I really hope the audience thinks “Man, that fat Chef rocked it!” I would also hope they would think, “The director is absolutely crazy for making such a straightforward show so magical! I loved it!”

What’s one thing that is different in this play or rehearsal process than anything else we’ve done in the Homestead Theatre Department?
For the first time, I personally have never felt so secure in the people of this show. Our communication and love for each other are so strong, I feel very loved and safe coming into rehearsal every day. Oh, also all of the aerial things always hanging. They’re cool, I guess.