The Homestead Drama Club took the audience for a swim in their show of The Little Mermaid in the James Barr Auditorium on Feb. 7-10, 2019.

The show focused on the story of Ariel, the youngest mermaid of her seven sisters. While her father and sisters believe in life deep under the sea, Ariel has different plans that land her close to the shore. Throughout the production, the audience follows Ariel as she falls in love with a human and longs to experience the life of two feet instead of a tail. “My job is to be a catalyst for anyone who is trying to become their own person and really trying to express who they are,” Bella Gabor, senior, said.

The vibrant and colorful costumes and makeup help bring the original Disney version to life. Costumes and makeup play a crucial role in every production at Homestead and allow for the story to translate to the audience. “Our main role is to make sure that the theme is shown in what the characters wear. We draw inspiration from all around us, and with this particular musical, we had to make sure that the youth and playfulness of the original production were incorporated in,” Celia Nelson, sophomore, said.

While the show goes on onstage, backstage keeps everything in order. The stage crew is responsible for building the sets and helping establish the environment. “ The set was a lot of fun to build. The Little Mermaid is such a fun show and I think the crew had a good time with the way the stage was set up and getting everything ready for the performers to go on. I also think the aspect of under the sea was a lot of fun to play with and design because we had to create a kind of aura for the audience,” Leticia Marson, junior, said.

With the help from three assistant directors, Aila Khan, senior, Frances Mackinnon, senior, and Sarah Mosinksi, junior, the production was able to function smoothly and get ready for show time. “Being a stage manager and assistant director for The Little Mermaid was the first time I ever did it for a musical. It was really interesting to see how the choreography and blocking differ between a musical and a play. It was also super fun because the little mermaid is such an upbeat show and it was all just about making it feel like a party for the audience. I also got to work with very talented people that made the experience amazing,” Frances Mackinnon, senior, said.

While the cast and crew had fun getting ready for the show, they also connected with the message and the characters themselves. “ Under the sea isn’t for everyone and everyone should feel comfortable wherever they feel comfortable. They shouldn’t have to give up anything for happiness,” Ethan Schlesinger, junior, said.

In the end, the show reminded the cast of their love for the stage and what theatre meant to them. “ In theatre, when you’re going out on the stage, you’re just being yourself. This is the way I let myself be free. I go up on stage and I sing and I do what I love to do… I always find something about myself that’s new, which is also why Prince Eric is so important to me. He doesn’t always want to be in a place of power, instead, he wants to go and discover the world and find new things about himself,” JT Snow, junior, said. 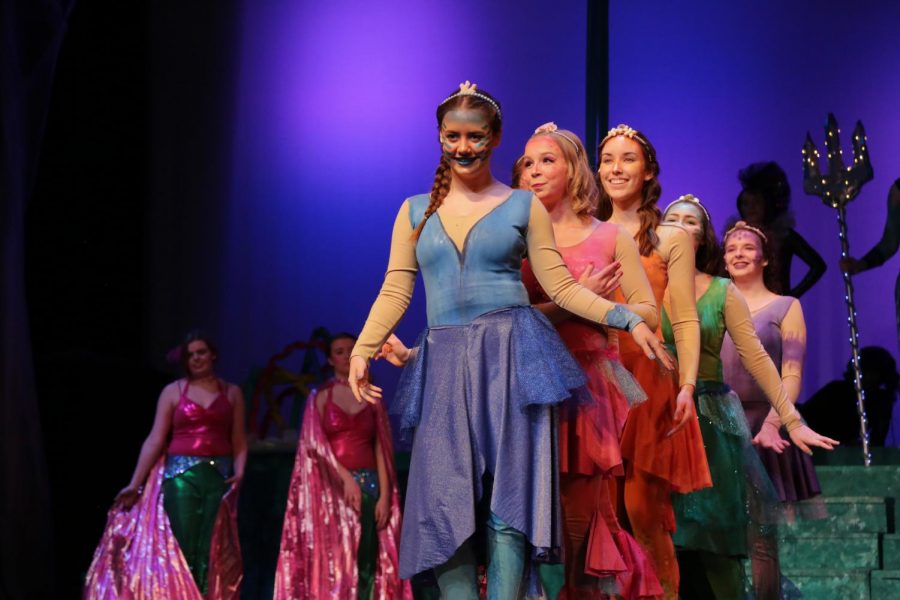 Sasha Shapsis
Emily Schuyler, junior, plays the role of one of the seven sisters in the production of The Little Mermaid.

It’s Stage Crew time!!
Join us for our 1st Aerial Workshop in two years!
Tech theatre hard at work.
Tech theatre working hard
Tech Theatre building for “Cinderella”
We are still going strong! Masked up and having fun! Let’s keep it up! Photos by @sam.estiban