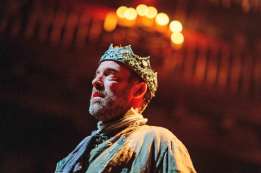 On a barren Scottish heath, three witches await the coming of Macbeth and Banquo, Scottish generals on their way home after a victorious battle. At the same time, on a battlefield not far away, a wounded soldier tells Duncan, king of Scotland, of Macbeth’s great courage in battle, then the thane of Ross arrives to inform the king of the traitorous actions of the thane of Cawdor. The king immediately sentences the thane of Cawdor to death and confers that title upon Macbeth, sending Ross to tell Macbeth of the new honor.

When Macbeth and Banquo arrive at the eerie site of the witches, the three prophesy that Macbeth (still uninformed of his new title) shall become the thane of Cawdor and later on shall be king, while Banquo shall be the father of kings although not one himself. When the thane of Ross arrives and addresses Macbeth with the new title, the witches’ prophecies already seem to be coming true, and Macbeth begins to wonder if the kingship could really be within his reach. However, when he reports to King Duncan, the king announces two intentions: first, of visiting Macbeth’s castle in gratitude of his valor and, second, of making his son Malcolm heir to his throne.

The scene switches to Macbeth’s castle, where his wife, Lady Macbeth, is reading a letter from her husband detailing the witches’ prophecies and their accuracy thus far. She sets her sights on becoming queen and plans to murder the king when he visits her home; she calls on the power of evil to help her stifle feminine weakness and spur Macbeth to action. 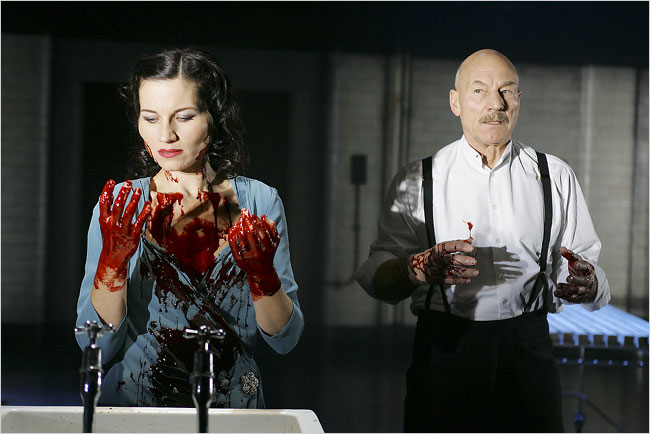 That evening, while the king sleeps in his home, Macbeth, with his wife’s urging and assistance, carries out the act, murdering King Duncan in his bed. The king’s sons flee the country in terror, and Macbeth is crowned king of Scotland. But he is haunted by the prediction that Banquo’s children are to inherit the throne and fearful that Macduff, a noble suspicious of Macbeth’s quick rise to power, will take matters into his own hands. Therefore, Macbeth brutally arranges for the murder of Banquo and his only son, Fleance; however, Fleance escapes the attack and flees the country. Macbeth gives a great dinner for the court and is about to take his seat when he sees the ghost of Banquo (invisible to the guests), and his frenzied and incriminating remarks break up the feast and raise Macduff’s suspicions even more. 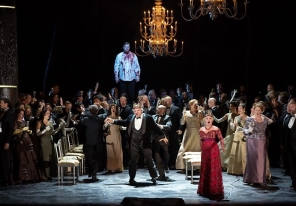 Macbeth goes now to consult the witches. They warn him to beware of Macduff. However, they also assure, much to his comfort, him that no man born of a woman can harm him and that he cannot be defeated until Birnam Wood, a medieval forest, comes to Dunsinane, the site of Macbeth’s castle. After this he is greeted with the news that Macduff has fled to England, whereupon Macbeth, in increasing paranoia orders the murder of Lady Macduff and her children.

While this is all happening, Lady Macbeth, who before the king’s murder appeared to be stronger than her husband, becomes completely overcome by remorse and guilt and, with unsettled mind, dies, probably by her own hand. 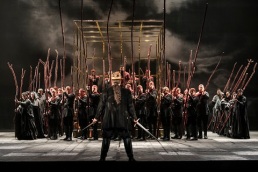 Macduff, gathering forces with the escaped Malcolm in England, is in complete revolt now and leads an army against Macbeth’s castle at Dunsinane, the soldiers covering their advance with branches cut from the trees of Birnam Wood, making it appear that Birnam Wood is coming to Dunsinane. Macbeth’s nerves are shaken as he recalls the witches prophecies, but he still clings to their saying that he cannot be harmed by any man born of woman. However, the castle is attacked and during his final hand-to-hand conflict with Macduff, Macbeth learns that his opponent was prematurely ripped from his mother’s womb, a Caesarean birth. Macbeth realizes he is doomed but, rather than being captured alive, fights to his death. Macduff kills him, cuts off his head, and announces Scotland’s freedom from tyranny.

Our Cinderella pit had their first rehearsal today!
We used to learn the Homestead Fight song in choir, so I still know it and wish the football team luck at state today!!
Finally figured out the musical cast!!
More shots from todays show! Don’t miss Puffs at 7 pm tomorrow!
The performers of “Puffs” did a wonderful job today! You’ve still got a chance to see it tomorrow at 7 pm!! We hope to see you there!