I didn’t audition for the fall show my freshmen year because I thought, like almost every freshmen, I wouldn’t get in.  Boy was I wrong.  I remember auditioning for the musical in November and the theatre teacher asking me where I had been for fall play auditions.  She could have used me.  Hindsight is 20/20. … END_OF_DOCUMENT_TOKEN_TO_BE_REPLACED

Auditions. The single worst word of the English language to any actor. The competitive fuss, the little mistake that you hope and pray the director didn’t see, and the hopeful nerve-wracking feeling of standing out. This is the very nature of most auditions, typically. But, why should they be like this? Why is there a … END_OF_DOCUMENT_TOKEN_TO_BE_REPLACED 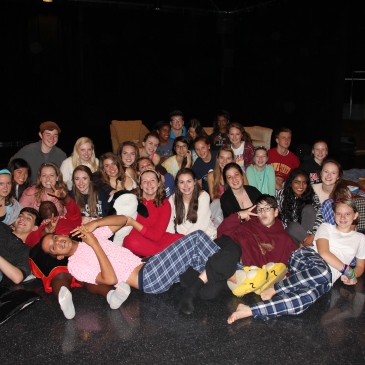 It’s 9pm on a Friday night and I’m in the presence of 30 Drama Club students watching Tim Burton’s “Alice in Wonderland.”  It’s Drama Club movie night!  Everyone is snuggled in blankets, perched on couches or sitting on pillows with piles of food around them in our wonderful Black Box Theatre. But don’t worry, this … END_OF_DOCUMENT_TOKEN_TO_BE_REPLACED

“For most actors, characterization means chiefly what their characters won’t do. As soon as an actor puts such a limitation on his work, he’s being less than himself, imprisoned in a straightjacket of don’ts… make choices that give you the maximum possible involvement. If there’s a possibility, however unlikely, however remote, that you might love … END_OF_DOCUMENT_TOKEN_TO_BE_REPLACED

“Many times when I ask an actor what his goal is in a scene, he will tell me, ‘I want to get away from this person. I want to run out of this room.’ I then ask, ‘Why don’t you run? What keeps you there?’  The answer to these questions is what makes the actor … END_OF_DOCUMENT_TOKEN_TO_BE_REPLACED

Just finished our over night lock-in for the musical! Cast, crew and pit gathered together to figure out who murdered Figg! Oh no!!!
Pretty photos with our awards!!
“Rosencrantz and Guildenstern are Dead” swept the State competition. They won eight awards:
Break legs at State, One Act!!!
Come see the One Act Showcase tonight at 7pm!!! It’s free!!!
Our Seniors fall play senior year vs. their fall show their freshmen year...