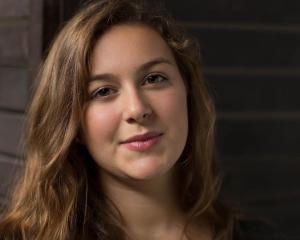 Apparently I told Meg her sophomore year that she was too brown, during the musical The Pajama Game. (in relation to all the brown she was wearing in the show).

This girl is talented!  I’m so glad she finally decided to audition for plays, Meg is always fun to work with.  And have you her sing?   Come see Musical Comedy Murders of 1940 t not only see Meg act, but also hear the music she wrote!

1. What inspired your journey into the Arts?

I’ve always been performing- usually I would make my friends make up skits and dance routines with me, theatre just seemed like somewhat classier version of just that

2. Who is your Character and how have you created that personality? What has been the biggest challenge you have come across in your character so far?
Elsa von Grossenkneuten- I guess I just thought about myself, and if I were an old lady, living alone in a big empty house, the kind of person I would be. The most challenging thing is trying not to overact

3. What are your funniest and worst experiences performing in front of an audience?

Funniest: Henry dropped his hat during Brigadoon, so, naturally, I picked it up, put it on my head and gave the audience a knowing look. Worst: Fifth grade, I had a nervous habit of spelling out everything I was thinking in sign language, so in the school play, I unknowingly signed every line to the play while on stage- my parents said it looked like I was deranged

4. If you had a chance to work with anyone of your choosing, who would it be?

5. What are you most proud of and what dreams or goals would you like to fulfill?

I’m really proud of my senior year performances, namely my IndStud Voice recital and Brigadoon. My dream would be to create some work of art – maybe write a play/musical/symphony/novel….

6. What do you want to do After High School? Do you have any dreams or hopes for the Future? Do you know where you are going to school?

I plan on double majoring in Music and Something Else (English, probably) at… uh… UW Madison (official decison! ahh!)

7. Which three famous people would you invite to dinner and why [dead celebrities included]? And what tasty treat would you prepare?

8. What is your favorite genre of music? Why? 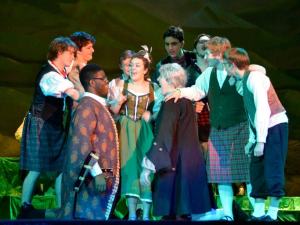 9. Have you read any plays lately? What are your favorite?

hmm… I read Waiting for Godot, which I liked because it was… interesting.

10. Tell us 5 interesting and unknown facts about yourself!
a) my cousin and I have the same birthday
b) I can sing the alphabet backwards
c) I can back dive into water from 15ft up
d) One of my prized possessions is an original newspaper dated April 15th, 1864 – a month before the Civil War ended
e) My dog’s name is Ike because my dog’s father’s name is Truman- and we decided to keep the whole presidential theme