The Musical Comedy Murders of 1940 is a lush, beautiful tableau of dazzling costumes, an intricate set, and a spate of characters from the gritty yet glamorous pre-war era. As it opens, a maid is stabbed to death.

Gory, right? Nope. Hilarious. The victim, played by a master of physical comedy, creates a chuckle-invoking death routine, then keeps the laughs going as the murderer props and drags her contorting body hither and yon before taking it offstage.

You see, in spite of it’s name, this is far less a murder mystery than a complete comic romp; think “The Pink Panther” meets the Marx Brothers.

The Musical Comedy Murders of 1940 is a comedy by John Bishop. The play was first performed at the Circle Repertory Company in their theatre at 99 Seventh Avenue South in New York City, later moving to Broadway, opening on April 6, 1987, in The Longacre Theatre. Both productions were directed by the playwright and shared the same cast. The play is said to have been based on several 1940s mystery movies, including The Cat and the Canary, one of Bob Hope’s first films.

Even before discussion of the onstage action, praise must be given to the set, props, costume and sound designers and crew. Often the unsung heroes of a stage production (and often only acknowledged when something goes wrong) the technical crew of Musical Comedy Murders do a fantastic job of creating a forties ambience. The intricate box set depicts the library of an opulent but mysterious mansion fashionably decorated (Tech Director Wayne Peters and his crew must be geniuses at building walls) and filled with secret passages. The costumes, properties, even the slightly tinny radio music was very authentic to the period.

The play takes place in a mansion in Chappaqua, New York in December 1940, specifically, the library. The mansion is owned and inhabited by Elsa Von Grossenknueten and her maid Helsa Wenzel. The first of the invited guests is an Irish tenor named Patrick O’Reilly; a theatre director named Ken De La Maize and a singer/dancer named Nikki Crandall quickly follow him. A young (and bad) comedian named Eddie McCuen follows Nikki, and takes an instant liking to her.

While talking, Eddie realizes that everyone coming, including Marjorie Baverstock, the producer, and Roger Hopewell and Bernice Roth, the writers, were all part of the creative team that made “Manhattan Holiday” in which The Stage Door Slasher murdered three women. Eddie instantly wants to leave but decides otherwise after the rest of the team woos him into staying.

After a series of dizzy conversations, multiple trips through secret doorways leading to a labyrinth of hidden passageways, multiple crimes and criminals are revealed. Eventually after much murderous mayhem the Stage Door Slasher is revealed through deciphering Bebe’s coded notebook.

I was pleasantly surprised with this production by HHS Theatre Department. Offering up a nice evening of entertainment with Musical Comedy Murders of 1940, murder mystery lovers will definitely enjoy the production and be thoroughly entertained.

Directed by Amelia Figg-Franzoi, this production has more turns in the story than the hidden passages in the mansion the play is set in. Ms. Figg-Franzoi has a very nice performance space to work in and takes every opportunity to use it to his advantage. The stage is a very large proscenium but Ms. Figg-Franzoi’s blocking keeps it feeling intimate and draws the audience into the story quite well.

She creates very nice stage pictures and places cast interaction everywhere he can on the set. Scenes flow smoothly in most places and the pace of the show goes well.

Costume design by the HHS Costume Crew is done very well. Each character is adorned in a way that reflects his/her personality and nothing is out of place or reads inappropriately. Some of the costumes are very elaborate and stunning on stage and some are simple. In either case, all accent the production in a positive way. 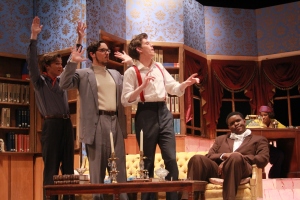 This ensemble cast works very well together on stage and the production quality shows. There is a lot of interaction yet no-one is ever upstaged.  The cast, built largely out of reliable HHS standbys, strikes a skillful balance between witty banter and slapstick humor – the tale opens with an excellently choreographed and rendered chunk of physical comedy, utterly silent, that had the audience laughing riotously from minute one.

Marty Bergquist gives the show its heart as Eddie McCuen, a struggling – very struggling – comedian along for the ride as a cast member. Full to the brim with the kind of terrible jokes no one actually does in comedy, at least anymore, he works his way through the grim circumstances to find his one true talent, involving creative use of a bottle of cognac. By far, he brings the most life to the show’s stale jokes and provides some solid physical humor.

Max Ginkel plays boastful director Ken with aplomb.   He also gets the evening’s funniest lines.  Ken has returned from Hollywood where he has directed films.  When he names a film that he has directed, Nikki says, “I’m sure that I’ve seen it.”  Ken responds, “You probably have, but it hasn’t been released yet.” 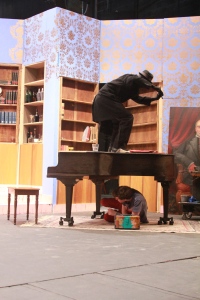 Andrew Minkin and Danielle Goodman nicely play the pompous composer and ditzy librettist, Roger Hopewell and Bernice Roth.  Andrew Minkin as Roger Hopewell offers a side-splitting rendering of his character. From facial expressions and movements to rolling eyes and drinking fabulously, you are thoroughly entertained by Mr. Minkin every time he is on stage. Ms. Goodman, Bernice Roth, who shines through with consistent laughs and perfect reactions, hits her jokes with perfect timing and is constantly invested throughout the show.

William Toney and Julia Wermuth as the sergeant and producer lend able support, with both their physical characters.  Come see the show to see what I’m talking about.

Meg Huskin as Elsa Von Grossenknueten has a wonderful role to play in this show and she represents it well. Ms. Huskin has wonderful stage presence, good line delivery and wonderful facial reactions. There is a lot going on with her character and Ms. Huskin doesn’t falter anywhere in the production.

Helsa Wenzel, played by Alex Gieske, is just exciting to watch perform. Ms. Gieske has many “hats” to wear as her character and succeeds with every one of them. Her moments on stage are hilarious and it’s hard to take your eyes off of her. (Hint, hint, hint)

The ingénue, Nikki Crandall– there has to be an ingénue in a ’40s murder mystery — is played with period panache by Sarah Mai. She’s a natural and it’s surprising to learn that she is only a freshmen.

Alden Laev plays a single role with two — make that three — personas. Stage veteran Mr. Laev is convincing in a role that grows to become crucial to the story.

Homestead High School’s production of Musical Comedy Murders of 1940 is a great evening of live entertainment for everyone, especially those who love a great murder mystery.

Dancer, Singer, Activist, Spy: The Legacy of Josephine Baker
The Theatrical Dance class is learning a Traditional West New Guinea dance called Kuku (Kou Kou or Cou Cou).
Last Chance to see "Hello, Dolly!" today at 1pm!!!
Come see "Hello, Dolly!" tonight at 7pm!!!
The various stages of "ready" you see during Mic Check.
The Stage Manager and Production Manager placing the iconic staircase in "Hello, Dolly!" They have to re-position it every night because it moves slightly each time it's rolled on and off.