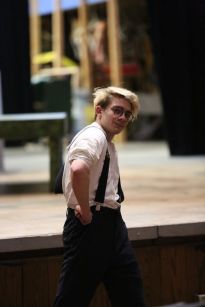 What’s challenging about bringing this script to life?
The show was written in house, and although it is similar to the generic Peter Pan, their are a lot of differences. Being in this show takes a lot of personal creativity.

What will the audience be thinking about in the car as they drive home after this show?
How are the actors playing the Twins not on broadway? 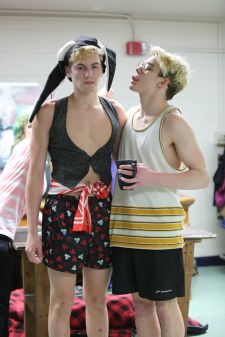 Who in the show is most like their character?
The Twins obviously.

If you could play any other character in this show, who would it be?
Grandma Darling

What do you want to be when you grow up?
Scottish

If someone was going to make your life into a movie, who would play you?
Daniel Radcliffe or Danny Devito

When did you first perform?
I performed my first open heart surgery when I was 4 years old. 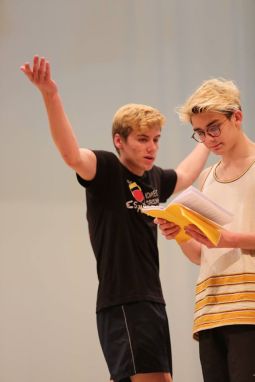 Besides this one, what’s your favorite stage show?
Phantom of The Opera

Who do you look up to (as an actor/director/etc.)?
Oscar Wilde

When you have a five-minute break during rehearsal, what do you spend that time doing?
Make coffee and/or pancakes

What do you do when you’re not doing theatre?
Listen to theater on spotify

If you had a magic wand, what show would you do next?
Once

Actors aren’t the only ones in theatre, we love our costume, make-up, crew, tech and pit kids too!!!
It’s new to crew night! Do you like wearing black and want to be behind the scenes for our first show of the year! Then join us for our first crew meeting of the year all are welcome. It will be held in the PAC from 6-7 pm please bring a parent/guardian to sign off on things for you. Can’t wait to see you there.
JOIN US tomorrow! All grades are encouraged to run. Even if you don't plan on running, come to the meeting to support your friends and vote for who you think is best for our 2021-2022 E-board!
Please join us for our FIRST COSTUMES MEETING OF THE YEAR!!! We will be meeting tomorrow (Wednesday sept. 8th) after school in the black box. This is an informational meeting all about the costume department. Can’t wait to see you there! If you have any questions please contact Zach Miller.
Interested in joining Stage Crew? Join us for our informational meeting Wed. Sept 8th at 6pm. Bring an adult who can sign forms for you!
Sept 1 is our first Drama Meeting. So join us after school!