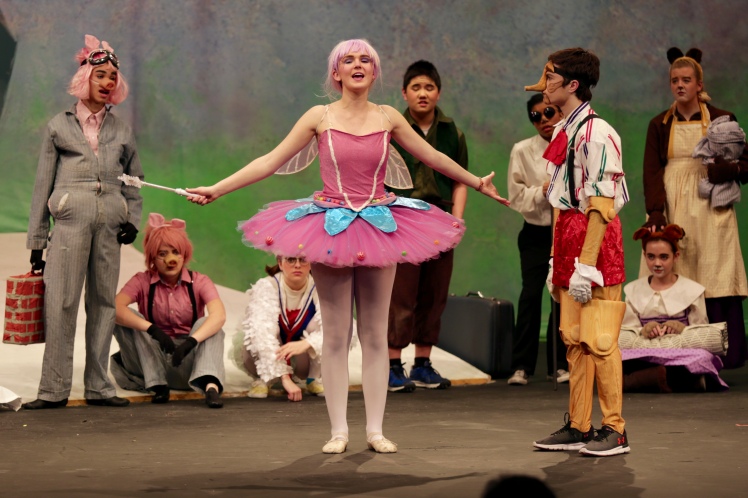 With enchanting storybook sets, eye-popping and dazzling costumes, a sumptuous live orchestra, dancing mice and palace guards, a young cast bubbling over with talent, a tad of Ogre flatulence, and a universal poignant message about judging a book by its cover, Homestead High School‘s award-winning theatre has a fairytale ending this year with its blockbuster Shrek the Musical.

As the much-feared towering ogre Shrek, Danny Levy’s prominent stature serves him well as he conveys this misunderstood soul with a heart of gold. It’s a huge, demanding part and he has no trouble selling us with his musical prowess, particularly in a string of solos in the second act, especially soaring in the ballad “When Words Fail” as he pines for Fiona. 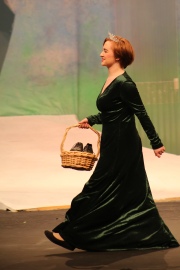 Maisie Allen is a formidable frontwoman as Fiona and only a Junior. She projects supreme confidence as a playful Princess with a twisted sense of humor in the frolic of “Morning Person” while leading a pack of tapping rats, in a brilliantly-staged introduction. And Ms. Allen has the vocal chops to back it up, I could listen to her all day. However, I am partial to her charming woes of misery competition with Shrek in “I Think I Got You Beat.”

Silma Berrada is blessed with more than half of the show’s one-line zingers. Dressed as a donkey and capped off with extravagant facial make-up, she doesn’t squander a moment on stage as she navigates a barrage of emotions from fear to courage and transforms from a strange beast to Shrek’s trusty confidant. Ms. Berrada is quite animated at every junction and is probably the most entertaining performer in the show.

The fantastic Jack Cannon embodies with Lord Farquaad with skill and precision in a committed, nuanced and hilarious performance with ample amounts of misguided malevolence and plain ole butt-of the-joke self-deprecation. And I do hope he is wearing kneepads for this physically-taxing costume with short stubby fake legs attached to his body.  Good thing he is only a sophomore, we will be entertained for years to come.

Shrek The Musical is also chock full of satire and smashing musical numbers like “What’s Up Duloc” and “Morning Person,” all choreographed by our new P.E. teacher, Amanda Cushnie. I spotted a sea of Bob Fosse jazz hands. And these kids were polished, in sync, and nailed those routines, even the hard-shoe number that was mostly comprised of newbies. 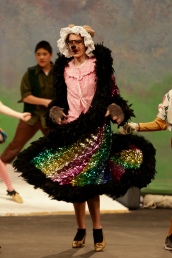 But the greatest spectacles in Shrek, especially for the younger fans, are likely the sequences (“Forever” and the gospel-infused “Freak Flag”)  with the exiled lineup of a Dragon and fairy tale characters that play like a Walt Disney Mardi Gras parade, with extraordinary and intricately detailed costumes and props of every color in the rainbow and for every single actor.

There are many, many standouts on the Homestead stage and several did make a lasting impression: a jovial Sam Laferriere as Pinocchio, David Blatz as the Big Bad Wolf in drag, and Rachel Truttmann as the Sugar Plum Fairy, just to credit a few.

Oh and special kudos to Bella Gabor as the Dragon in a soul-stirring rendition of “Forever,” as well as Clarie Looker, who sparkled immensely as the convincing caricature voice of the hostage gingerbread cookie Gingy.

Music Director Kristen Houge is responsible for the enthusiastic and top-notch vocals. She also conducts the mostly student ensemble of musicians with an extra sweet string section and wistful woodwinds.

Directors Amelia Figg-Franzoi and Christopher Elst have mounted an ambitious production with all the bells and whistles Homestead audiences expect from a massive musical like Shrek The Musical. It’s a briskly-paced and well-heeled monster with a stoked and prepared cast that spans entire stage and an energetic stage crew responsible for all the moving parts on every plane on the stage.

The Homestead gang pulls this show off with pleasant aplomb and embraces it with such spirit that audiences are guaranteed to leave this theatre with that warm and fuzzy, feel-good adrenaline of a joyful happily-ever-after ending.

“Shrek The Musical” continues Friday and Saturday, February 9 and 10- at 7 p.m. with a 1 p.m. matinee on Sunday, February 11. Shows are at Homestead High School 5000 W. Mequon Rd. Mequon WI.  Tickets are sold at the door.

Come see "Hello, Dolly!" this weekend!
"Hello, Dolly!" Dress Rehearsal!!
Creating the intro for our hip hop dance. Using phones for lighting design… it’s so cool!
After school Today (Friday, Jan 20) there will be a makeup workshop. We will go over what the makeup will look like for "Hello, Dolly!", and how to use/apply it.
Stage Crew hard at work. This is a massive build with lots of detail painting!
Look the Pit Orchestra is having fun learning all the music for "Hello, Dolly!"