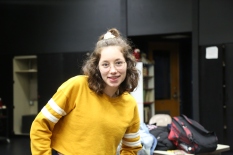 Who are you?  What year are you?  What are your interests?
Hello, my name is Sierra/ Oscar-Edgar (my tentacle name) and I’m a senior performing in my very last musical! My hobbies include watching Parks and Rec, The Office, bringing sally down, and creating a million and seven Pinterest boards full of different shows I want to direct one day.

I’m so glad you decided to tell people about yourself and the current Homestead production.  What exactly do you do for The Little Mermaid?
In The Little Mermaid, I am a sassy ‘lil seagull who is just trying to get his piloting license but is also a good birdy who helps teach Ariel how to walk. Sounds weird, but it’s part of the day to day business. You have to hustle being a small town bird. Then I make a guest star appearance as Tentacle Eight in Ursula scenes. Marvin (my tentacle) is a slimy boy attached to Ursula who really hustles, being the runt in the family. Most importantly I play the majestic Ray, Ronald. He is gorgeous, charming, fun loving, and likes getting caught in the rain. If you don’t already love him, you will when you see him dancing his fins out on stage.

What brought you to join the cast, crew, pit for The Little Mermaid?
I joined the HHS theatre department when I was a sophomore in my first musical, Fiddler On The Roof. From there I have been a number of shows and I love theatre with all of my heart. I wanted to be in this musical because it was one of my favorite movies growing up and most importantly because I’ve created such an amazing family within the theatre department.

Do you have any stories from rehearsals, practices or crew sessions?
Morgan once brought a huge box of limes to rehearsal and I just wanna say, I really did feast.

All art comments on something, aligns itself with current issues.  How does The Little Mermaid comment on current social or political issues and has it influenced you this winter?
I think there are two important messages you could take from this show. First of all, don’t let others tell you who you can and cannot love. Love is love and it doesn’t matter their sexual orientation, race, social class, or if you’re a mermaid in love with a charming prince. Most importantly, even if you may not agree with others like King Triton to land folk, there can always be a found peace between two very different worlds; You have to embrace love and find harmony.

What do you hope the audience will be thinking about in the car as they drive home after this show?
“I WANNA LEARN THOSE ICONIC DANCES!”

Anything else you want to talk about?
I just want to say thank you to all of the directors in the show, and most importantly to Figg who believes in me, challenges me, and has helped me grow so much as an actor these few years.

Making some posters
Some poster photos!
Behind the scene pics of the Poster Photoshoot today!!
Homecoming Parade: "A Night at the Movies"
It’s homecoming time!
The one Act set is coming along.