My journey with this Macbeth started last spring when the students expressed a desire to perform another Shakespeare play.  One student suggested Macbeth going so far as to give us the season title which we used, “Decisions Determine Destiny.”  Macbeth is all about the choices we make and the consequences after.  Yes, the Witches told Macbeth that he would be king, but would he have killed Duncan if he had never heard their prophecy?

Just like the characters in the story had to make choices, we, the people creating the story had to make decisions.  The first choice made was that we would destroy the show and build it back up with aerial dance, combat, and movement.  For that to happen, we brought in Andrea Burkholder and Chris Elst, two amazing people we’ve worked with on other shows this year.  The three of us guided the cast in creating movement sequences for our slightly non-traditional show. 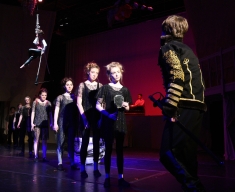 Another piece that allows our show to deviate from the norm is that we have a live orchestra playing for us on stage.  In February, junior, Evan McGuire asked if he could put together a group of musicians to play for the show.  He found Richard Strauss’s Macbeth Op.23 tone poem and rewrote parts to fit our show.  Senior John Sellars actually composed for us as well, the orchestra plays his pieces throughout showing times of war, distress or the witches conjuring.  These students would practice after school independent from our rehearsals and it was always magical.

As with most shows, we ask the students to create, choreograph pieces and then insert those pieces into the show.  Macbeth is no different.  We used improvised movement sequences to create, setting as we went.  The spirits took choreography learned in their Theatre Dance class and manipulated it to fit our show and we’ve all been playing with our three long red aerial silks in ways we don’t normally think to use them.

Our stage crew, while small, has built a mighty set.  They spent their spring break putting up the walls, painting, hanging lights and getting ready for the show.

This past week, everyone has grown so much and put their heart into this piece.  We hope you enjoy our version of William Shakespeare’s Macbeth.