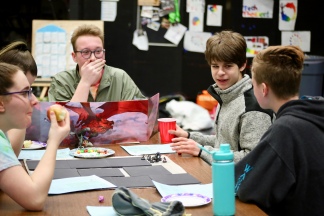 It was a bright a sunny morning, the birds chirped, the air smelled like spring and the world was beginning to awaken as the snow melted.  But no one in the Black Box theatre knew what was happening outside, they were struggling to stay alive and escape an Elven Dungeon, fighting Kolbalts, Skeltons, Bugbears, and Wraiths.  Yes, they were playing Dungeons and Dragons.

This Sunday the cast of She Kills Monsters: Young Adventurers Edition gathered in the Black Box to play a short Adventure.  Most had never played before and truly had no idea what they were getting themselves into.  “I never thought rolling a dice would be so climactic,” Katrina Liberman laughed as she took her 20-sides dice and roled for her life.

“The Dungeons & Dragons roleplaying game is about storytelling in worlds of sword and sorcery. It shares elements with childhood games of make-believe. Like those games, D&D is driven by imagination. It’s about picturing the towering castle beneath the stormy night sky and imagining how a fantasy adventurer might react to the challenges that scene presents.

Unlike a game of make-believe, D&D gives structure to the stories, a way of determining the consequences of the adventurers’ action. Players roll dice to resolve whether their attacks hit or miss or whether their adventurers can scale a cliff, roll away from the strike of a magical lightning bolt, or pull off some other dangerous task. Anything is possible, but the dice make some outcomes more probable than others.

In the Dungeons & Dragons game, each player creates an adventurer (also called a character) and teams up with other adventurers (played by friends). Working together, the group might explore a dark dungeon, a ruined city, a haunted castle, a lost temple deep in a jungle, or a lava-filled cavern beneath a mysterious mountain. The adventurers can solve puzzles, talk with other characters, battle fantastic monsters, and discover fabulous magic items and other treasure.”

Why did we play the Dungeons and Dragons you ask?  Well, She Kills Monsters takes place in the 90’s and the characters are playing the game.  We as audience members see it come to life as the tabletop becomes the stage and the little figures transform into actors playing such characters as Faries, Elven warriors, Deamon Princesses, Paladins, Mages, and Evil Cheerleader Succubus.  To make sure the actors understood what they were acting out, directors Amelia Figg-Franzoi and Christopher Elst decided everyone needed to play a short Adventure, a game that Chris created himself for D&D. 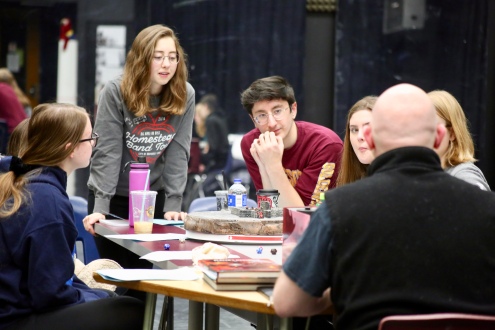 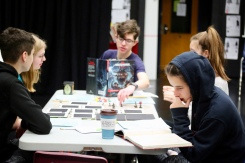 We had three games running at once with three different Dungeon masters, Chris and two students, Ari and Zach.  Each table while they had the same story, chose different adventures.   One group was smart enough to avoid a room all together and saved themselves from battling skeletons, while another group all died while battling said skeletons.  Dungeon Master Zach laughed at the end of the day saying, ” Ben can’t play Dungeons and Dragons without dying at least twice.”   While the other tables were busy killing the Kolbalts attacking their party, one group tried a different tactic. “We tried to befriend the Kobolds and have them work with us and it then took forever to continue past that room,” Julia Rowe explained, she will be playing Evil Tina, one of the Cheerleader Succubi.

“The funniest part is that you have no idea what might happen because there’s never one set story for every time you play.”  Kaet, who plays the Dark Elf Kaliope in She Kills Monsters: Young Adventurers Edition explained. “Also working together for a common goal was really fun because you could brainstorm and figure things out together.”

Owen Wiess, who has played before, explained, “I enjoyed the game it’s an experience that’s so fun because you are there as your character and it feels like something is at stake it feels like you are in the room fighting the centipede as your bard runs away it’s just a fun experience.”  That is theatre, and when you can find a game to play with your friends that brings you together and lets you improvise, the world seems a little bit brighter.