Who do you play?
I play Sabine d’Artagnan (yeah I know stupid last name. But imagine being named ‘d’Arty d’Artagnan.’)

What’s challenging about bringing this script to life?
Probably finding the funny moments in the play. The play is written in subtle and obvious humor, and bringing out a different personality in my character has been a dream.

What will the audience be thinking about in the car as they drive home after this show?
“Wait… Sabine exists?”
“Wow I can’t believe I watched a group of 16-17 year olds fight each other for 2 hours.”

How is this production bringing something new to this story?
Well, I know most Sabine act-er-ress-es haven’t portrayed Sabine quite like I am. In most versions, Sabine’s just a meany-pants, but MY Sabine is a 3 year old stuck in a 17 year old’s body. I also know that some of the genders of the characters have been switched, so that brings a whole different atmosphere to this story.

Who in the show is most like their character?
Honestly, David Blatz with the King. The comedy he brings to the play is impeccable and he really carries himself like a King when working. 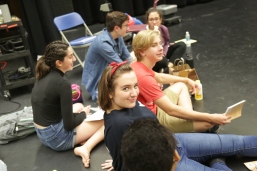 If you could play any other character in this show, who would it be?
Either d’Artangnan or Porthos. Porthos because I’m about as extra as they are and d’Artangan because pure and clueless d’Arty would be fun to play. IMAGINE IF THE SIBLINGS WERE GENDERBENT HOLYYYY COWWW

If someone was going to make your life into a movie, who would play you?
Obviously Amy Poehler or Steve Carell’s love child. I can just picture it now.

When did you first perform?
When I was in Figg-Seniors fourth grade class, the famous Donges Bay play, Scared Silly. I played the grandma(???) that is a witch for halloween mostly because I played the witch character well, but then I got nervous and used my normal voice. I THOUGHT I HAD TO CONFORM TO SOCIETY’S STANDARDS.

When you have a five-minute break during rehearsal, what do you spend that time doing?
Bruh I don’t even know, when was the last time I had a five minute break??

* “Every time you vlog?”  Figg thinks as she’s reading this post

If you had a magic wand, what show would you do next?
Book of Mormon. Hands down best show. Can the wand magically cast people too? I wanna be Kevin Price.

What’s your perfect Sunday afternoon look like?
Hanging out with friends. Their names are me, myself, and I. They’re cool, you should talk to them sometime.